The “kjVIs” (kreative junge VerfahrensIngenieure = creative young process engineers) are a group of only 10 – 12 members. Most of them are doctoral candidates; some are students or beginning their careers in industry. The kjVIs are part of the VDI-GVC (Association of German Engineers – Society of Process- and Chemical Engineering) and represent the interests of young process- and chemical engineers, such as students, doctoral candidates and those at the early stages of their careers. 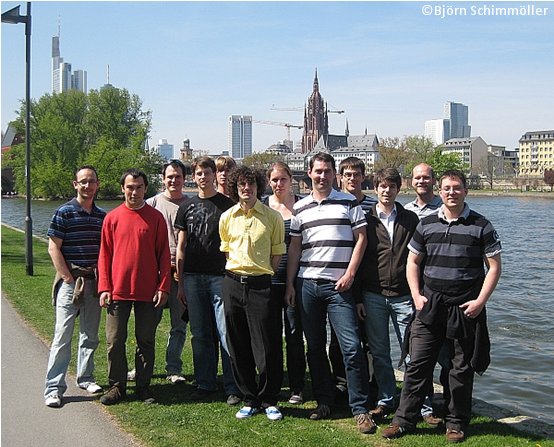 The kjVIs are mostly known in the scientific community for their “Studenten und Doktorandenprogramm” (SuD), a students’ and doctoral candidates’ conference program run since 1997 and the European ChemCar competition.

The ChemCar competition is a car race with quite uncommon rules. The winner is not determined by speed but by precision. Teams of typically four to six students prepare for this competition by designing and building a car which is operated by a chemical reaction. The car must fit into a shoe-box and emissions are strictly limited. Normally these students spend several months preparing their ChemCar. An hour before the race starts, a distance and payload is chosen at random. The goal is to get the car to the chosen distance line or as close as possible. Additionally, the ChemCar teams must give a poster presentation of their concept to a jury formed of representatives from the supporting companies.

At the ProcessNet Annual Conference 2010 in Aachen, the ChemCar competition was supported by BASF, Bayer Technology Services, Evonik, Lonza and Merck. Finally, the results are presented to the conference attendees at the conference dinner and the awards are given to the winners. The best team obtains the ChemCar cup and 2000 €, the second team receives 1000 € and the third team 500 €. Nevertheless, all ChemCar participants are winners of public respect for their efforts.

The SuD-program contains several sessions of seminars on finding and starting a job. For this, the kjVIs invite experienced speakers from industry and academia. Other components of the SuD program are guided tours to the booths of the cooperating companies at the job fair, where the companies present themselves to the students and give advice for job opportunities. At the ProcessNet Annual Conference 2010 in Aachen, the companies BASF, Bayer Technology Services, DOW Chemical, Evonik, InfraServ Knapsack, Lanxess, Lonza and Merck cooperated with the kjVIs and helped support the SuD program.

Due to the fact that students as well as the cooperating companies are highly interested in this program, it has been established as an important part of the ProcessNet Annual Conference.

Beside these activities, the kjVis also perform some less visible work. This year, they are supporting the DECHEMAX – pupils’ competition for the fifth time. Every year roundabout 2500 teams, averaging 4 members in each, participate in this competition. Other efforts of the kjVis to help pupils to get in touch with process engineering are publications like “Neugierig auf”, a brochure which presents perspectives and opportunities in the field of process engineering, and several slides containing presentations on different process engineering fields specifically designed for teachers delivering presentations to their school classes.

The work of the kjVIs can be summarized as being the network between universities, companies, associations and schools in the process engineer´s community and related disciplines, caring for those who are becoming professionals, moving from school to industry.

The ECCE 2011 in Berlin which will be held together with the ProcessNet Annual Conference will be an opportunity to present our program as well as the ChemCar Competition on an international stage. The kjVIs are looking forward to having you as a participant of the ECCE 2011 in our program. If you want to actively shape the students’ program, the ChemCar competition or other “kjVI”-Projects, you are welcome to contact us (see Call for Chemcars).

For further information, please don´t hesitate to visit our websites: