The current renaissance of tattooing revisits a tradition cultivated in numerous cultural environments over centuries. In this second part, we continue with more information on the coloring materials used in tattooing.

Generally speaking, an insoluble pigment can be considered potentially suitable for tattooing purposes, irrespective of its chemical nature. Earliest employed were powdered charcoal and soot, followed by ground-up colored minerals like mercuric sulfide (cinnabar), various iron and chromium oxides, as well as cadmium and lead compounds. The Roman doctor Aetius, around 500 A.D., described use of an applicable pigment mixture [12] that today would cause even a hard-nosed chemistry fanatic to cringe:

Formula: Grind the corroded bronze with vinegar, add all the other ingredients, and strain the resulting mixture through a sieve. Stir the powder obtained thoroughly into two parts water and one part leek juice. Wash the appropriate portion of skin with leek juice, and then prick in the proposed design using sharp needles: deeply enough to cause blood to flow. Then rub in the dye.

Among the far more than 10,000 known natural and synthetic dyes, only a small fraction demonstrate to a satisfactory degree the desired properties:

These demands are essentially applicable as well to every wall paint on the market, but for tattoo dyes the requirements go further. Here the product should also be:

No pigment, whether natural or synthetic, is in fact able to fully meet all these requirements. Let us begin with an overview of pigments actually employed today for tattoos [13].

Among inorganic pigments, only carbon black (soot) and titanium white (titanium dioxide) are today of major significance. Both are present in a great many color blends used in tattoos, primarily as a way of making them either lighter or more muted.

Roughly 50 % of all tattoos are simply black, so the pigment carbon black plays a very special role.

It can be prepared chemically in an extraordinarily large number of forms: with respect to primary particle size, overall structure, and surface structure. Most commercial “soot” or carbon black is prepared by the “furnace black” process, in which heavy aromatic oils serve as the feedstock. These are sprayed into a combustion chamber at greater than 1200 °C, and the actual carbon black results as a consequence of incomplete combustion. Rapid cooling of the product is achieved through injection of water. Surface occupancy by functional groups can be varied by modifying the preparation process, and this in turn determines polarity, hydrophobicity, and acidic (carboxylic, phenolic, or quinonic) or basic character (due to ethers, peroxides, or lactones) of the particle surfaces.

Apart from inorganic black and white pigments, various iron oxides (yellow, red, black) and chromium oxides (greens) may be added for muted tones in permanent make-ups. The role of iron oxides has in recent times declined, since the (natural!) nickel content of many iron ores can induce allergic reactions.

Colorful tattoos are achieved largely with organic pigments (see Fig. 6). All such colorants are registered with generic names in the Color Index (CI); e.g., Pigment Red 254. After publication of its chemical structure, a colorant is also provided with a five-digit CI Constitution Number. Together with black and white, the entire color spectrum can now be covered. 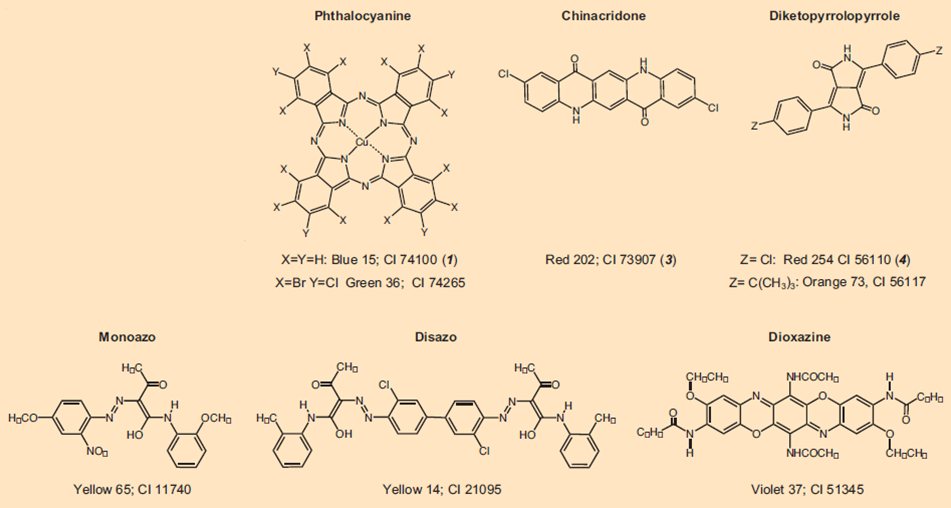 Pigments used in tattoos are not fundamentally different from those utilized in cosmetics, or car paints. But this does not mean that car paints are injected under the skin, as the media – often with delight – like to imply, despite knowing better. Rather, practitioners in choosing tattoo colorants often fall back on pigments already prized in automotive paint applications because of their great stability to light, and to weathering.

A tattoo colorant is a fine dispersion of color pigments in water as the dispersion medium [14]. Such a dispersion is by nature unstable, since the pigment particles tend to settle slowly to the bottom due to their higher density.

For the rate of sinking or sedimentation rate v of a sphere (diameter d and density ρo) in a liquid with a density ρw and viscosity η:

Equation (1) comes about by equating the gravitational and frictional forces applicable to a spherical object in a liquid.

The small value is misleading, however, because pigment particles tend to agglomerate, i.e., they congregate into larger units. The increasing size (increasing value of d in Eq. (1)) leads to an increasing rate of sedimentation. Modern, off-the-shelf tattoo pigments are stable for several months, and, therefore, will not be simple suspensions. To the contrary, careful examination shows them to be chemical high-tech products.

The preparation of a stable tattoo pigment begins with addition of a surfactant to the dispersing agent (water), as a way of reducing its surface tension. This simplifies removal of air bubbles from the particle surfaces, encourages wetting of the pigment powder, and hinders clumping as the material is stirred in.

Pigments used for tattoo colors consist of primary particles that grow together over their surfaces to aggregates, and then via edges and corners to larger agglomerates. Robust mechanical crushing (e.g., in a “dissolver”, or with a mill) will reduce these agglomerates physically to primary particles. The added dispersing agent inhibits renewed coalescence.

Ionic dispersing agents like polyacrylate are adsorbed on inorganic mineral particles, and confer a negative charge on the particle surfaces, which further hinders aggregation electrostatically. Organic pigments can be stabilized with linear or branched dispersing agents based on polyurethane or polyacrylate, where adsorption occurs by way of hydrogen bridges, dipole-dipole interactions, and Van der Waals forces. With dispersing agents of this sort the stabilizing effect on the primary particles is a consequence, above all, of steric effects of the polymer. Overall, the dispersion process leads to a reduction in particle size, and the added dispersing agent helps ensure that particles remain small.

Further stabilization is achieved by increasing the viscosity (increasing η in Eq. (1)) through addition of a thickener like xanthan gum, or a cellulose derivative, a polyacrylate, or a polyglycol, all of which have long been successfully used in the foods industries [15].

Viscosity cannot be increased without limit. A viscous colorant could be introduced into the skin only with difficulty. Optimal adjustment of viscosity profile is one mark of a quality tattoo colorant.

Innovative producers of tattoo colorants attempt to improve the characteristics of their products by chemical modification. In this regard, they view the pigment as a “potential implant”, and thus orient themselves around development of such medical products. The goal is increased long-term stability of the pigment in skin, minimal allergic risk, and reduced migration of pigment into other parts of the body. These goals are achieved through various encapsulation strategies for pigment particles within biocompatible layers (see Figs. 7–9):

Emulsion Polymerization
To the pigment dispersion are added surfactants, together with a liquid monomer, accompanied by vigorous stirring. This homogenization causes pigment particles to be incorporated into monomer droplets, and these are in turn emulsified by the surfactants. Upon addition of a chain initiator, and at temperatures of 60–80 °C, radical polymerization commences, leading to encapsulation of the pigment particles.

Layer-by layer Coating
Through this process, initially a polyelectrolyte with opposing charge is adsorbed onto the pigment. Subsequent alternating capture of oppositely charged polyelectrolytes leads after the sixth cycle to an encasing nanometer layer.

Figure 8. The layer-by-layer process for encapsulation of pigments.

Solvent Evaporation
Through a spray-drying process, the particle dispersion is converted along with polymer into a fine aerosol, which is dried at temperatures of 100–200 °C. In this way the polymers are transformed into an encapsulation.

Part 3 continues with more information concerning the tattooing process itself.

Tattooing from a chemical point of view

The process of tattooing