Tattoos are part of our cultural heritage and during the last few decades, we have seen a renaissance of tattooing. In this third part, we look at the tattooing process itself.

Tattooing with modern instruments appears to be nothing but a simple mechanical process. One or more needles, dipped in dye solutions, penetrate ca. 4 mm into the skin and thereby transport selected colors into the dermis. Only upon closer examination does it become clear how the developing chemical/physical masterpiece is accomplished: through the addition of tailor-made thickening agents, the flow properties of modern tattoo colors are adjusted so that maximum color discharge per pinprick is achieved.

A viscous dye preparation, in the course of dipping, is induced to cling firmly to the injection needle. It then becomes subject, during injection, to intense shear forces within the gap created between skin tissue and needle. These shear forces, in turn, result in a very abrupt decrease in the viscosity of the dye mixture. This is an example of “thixotropy”, an effect perhaps most familiar from the behavior of tomato ketchup: a substance that at rest is highly viscous, but when vigorously shaken (high shear forces!) becomes quite fluid, only to again become viscous upon standing.

That is precisely what also happens here: a viscous tattoo dye preparation becomes very fluid during injection, causing it to flow readily into the lower skin layers, and during removal of the needle nearly all the residue is cleanly stripped off. Settling into the dermis, the injected color – now in its intended home in the skin tissue – once again becomes viscous, preventing it from straying away from its place. Only a flow behavior like this, carefully adjusted using a thickening agent, will produce a tattoo with sharp contours and a rich color saturation, based on a minimum number of injections.

7. After the Tattooing Process 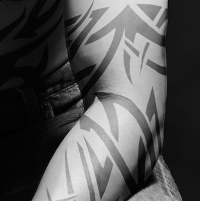 Meticulous and proper wound treatment is crucial in the interest of a complication-free outcome, regardless of the tattooing procedure employed. Above all, it is necessary that penetration by bacteria, fungi, or viruses be prevented to facilitate the healing process.

Optimal care starts with the application of a breathable bandage so that no dirt will make its way into the open wound. The next day the wound should be uncovered, and only covered again if it becomes necessary (e.g., to prevent friction due to clothing). A salve based on a protective grease containing a substance like pantothenol or bisabolol might be applied to help keep the skin supple and to accelerate the healing process.

Pantothenol minimizes itching and the likelihood of inflammation and encourages healing. It is a polyol amide which is a precursor to pantothenic acid (vitamin B5). Bisabolol is an isomeric mixture of a monocyclic sesquiterpene alcohol and is the principal active ingredient of camomile oil. It has antimicrobial properties, and aids in the healing of wounds. Incidentally, one should always avoid unnecessary irritation due to sunlight, saltwater, or frequent washing.

8.1. Inflammation and Infections [16,17]
Even optimal care cannot guarantee healing without complications. Stabbing with a tattooing needle amounts to creating a deep tissue wound with bleeding, typically resulting in inflammation after an hour or two, which may persist for up to two weeks.

Based on a Danish study [18,19], 15 % of freshly tattooed subjects report subsequent skin problems like itching, ulcers, and redness, all of which usually heal spontaneously within a few weeks. Also, the occurrence of bacterial and viral wound infection has frequently been described in the medical literature. In 2006, multiple cases of a Staphylococcus aureus infection were documented, proving stubbornly resistant to several penicillin preparations (Methicillin). A total of 44 people were affected, mainly students, 34 of whom had been tattooed, with the other ten being infected classmates. This outbreak was eventually traced to an amateur working under unhygienic conditions [20].

This illustrates the fact that every potential client must accept responsibility for personally conducting a critical and sober examination of the surroundings during a preliminary briefing, as protection against grave danger, particularly when on vacation in a sunny clime. Getting tattooed in a dark tavern near the harbor, or in an exotic beach hut, may seem romantic, but a resulting infection surely will not be!

8.2. Palpable Swelling of the Skin 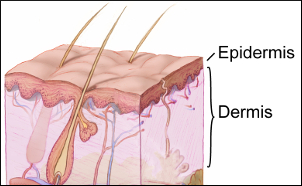 The introduction of excessive pigment may lead to a knotty or flat elevation of the skin, which may be temporary, or it could prove to be chronic. If a purely superficial pigment excess is introduced into the epidermis, natural cell regeneration will usually transport it to the skin surface, there to be released. After the wound heals, however, this could still result in pale, pigment-free blotches.

For a pigment excess delivered more deeply within the dermis, such an elimination is not possible, since the pigment would be unable to pass the boundary to the epidermis. This, in turn, could lead to chronic tumefaction (swelling), a frequent occurrence following the creation of heavy black lines, bars, or surfaces.

The most common complications arise from intolerance with respect to individual substances present in the tattoo dyes. The specific trigger may be an inorganic metallic pigment (a chromium, cobalt, mercury, or especially nickel compound), a specific organic pigment, or a preservative added to ensure sterility. Many hypersensibilities appear only slowly, perhaps even after months. In general, complete lists of pigment ingredients are unavailable, and this may make it impossible to positively establish the identity of an allergen.

Clinical experience shows that the popular red pigments are particularly prone to produce allergic reactions. This points in the direction of azopigments, the category into which most red pigments fall. Which red pigment or associated degradation product might be the actual culprit usually remains unknown, however [16,17].

9. What Eventually Happens to Pigments Introduced into One’s Skin?

After the introduction of a pigment, the immune system usually recognizes the presence of a foreign material and proceeds to fight it, using a repertoire of defense mechanisms. Macrophages (scavenger cells) play a special role here. Normally their task is to recognize biological intruders, which they bind to their surfaces before initiating a digestion process (phagocytosis) [21].

Pigment material is also recognized as foreign to the body, but it is not subject to digestion. After first enveloping such a particle, a macrophage may well die, in which case the ultimate outcome is likely simply to be encapsulation. Thus, encapsulated pigment might remain permanently enclosed within the dermis: an ideal consequence from the standpoint of the person who was tattooed.

It is possible that macrophages will cause such pigment particles to be transported to the nearest lymph node. After a tattoo has been applied, a transfer like this might take months, leading ultimately to an accumulation of pigment in the lymph node. However, there has so far been no indication of further transport to other organs in the body.

9.3. Some are Chemically Degraded

The examples of pigments provided in Fig. 7 (see Part 2) clearly demonstrate a great wealth of potential diversity with respect to both structure and reactivity. The class of azo dye compounds has been subject to especially critical consideration, since many such compounds are well known to constitute health risks. Certain azo dyes have, however, been used for decades to color plastic toys and nail polishes, and there are many cases in which verified toxicological risk assessments exist.

Especially problematic here are nonpolar compounds, which due to their water-insolubility are not rapidly eliminated via the kidneys, instead perhaps being subjected to reductive cleavage in various organs and tissues [22]. This may, in turn, lead to nonpolar aryl amines, which could be converted into carcinogenic N-nitroso substances [23–25].

All azo pigments are in general prohibited in tattoo dyes if their reductive azo cleavage could lead to primary arylamines with carcinogenic, mutagenic, or reprotoxic characteristics (see Fig. 10). Moreover, the German Tattooing-Agent Regulations – consistent with EU rules – ban certain other pigments as well, including a few cytotoxic triphenylmethane dyes.

Often, tattoos fade if they have been applied in exposed locations. This points to photochemical decomposition due to visible and/or UV light. Indeed, many dye pigments are decomposed by sunlight, with azo dyes decaying into primary aromatic amines [26]. Surprisingly, irradiation of the popular red-violet 2,9-dichloroquinacridone (3) has been shown to produce, among other things, 4-chloroaniline (see Fig. 11), itself a suspected carcinogen [27]. So far, however, there is no final verdict regarding the corresponding health risk, due to an absence of quantitative data.

Prohibitions on certain specific dyes are well founded, but such action alone makes sense only if the rules are obeyed. And from this perspective the situation is sad. It is sobering, for example, that the Bavarian State Ministry for Health and Food Safety determined in 2013 that of 28 investigated, commonly utilized tattooing and make-up colors, nearly half produce carcinogenic aryl amines upon reductive cleavage. Every fourth sample examined was in fact contaminated with primary aryl amines in concentrations above 5 mg/kg (and as high as 206 mg/kg!). Such samples should not even have been marketable [28].

Extensive investigations by Urs Hauri at the Cantonal Laboratory of the Health Department for the city of Basel, Switzerland, further confirm the picture suggested above [29, 30]. Because of missing or even deliberately falsified data, many dye manufacturers – including those providing tattoo products– cannot assure that their products meet legal standards, nor are they competent to advise customers regarding the compositions and levels of health risk of such dyes [31].

In the forthcoming Part 4, we consider the removal of tattoos, permanent make-up, and henna.

[23] Couincil of Europe, Resolution ResAP(2008)1 on requirements and criteria for the safety of tattoos and permanent make-up, 2008.

Tattooing from a chemical point of view

The process of tattooing