Ascending hot combustion gases, together with fresh air being drawn in from below and from the sides — these are the factors that confer upon a flame its typical elongated form. But under conditions of weightlessness there would be no buoyant uplift, and no convective airflow. So what would the flame from a burning candle look like in such a weightless environment?

8. A Burning Candle in a Weightless (“Zero-g”) Environment

NASA has actually conducted an extensive series of relevant studies based on burning candles. This of course had nothing directly to do with creating a festive Christmas atmosphere in the context of space flight, but was centered rather on the combustion behavior of materials in general, on potential soot formation, and on appropriate strategies for extinguishing flames that might develop within a spacecraft. In 1992, inside a sealed polycarbonate container, astronauts lit ten candles over the course of a space-shuttle mission (STS-50, USML-1). Additional studies were conducted in 1996 aboard the Russian MIR space station. Within a few seconds in each case, a stable flame established itself, one that looked very different indeed from what we are accustomed to on earth (see Fig. 6). 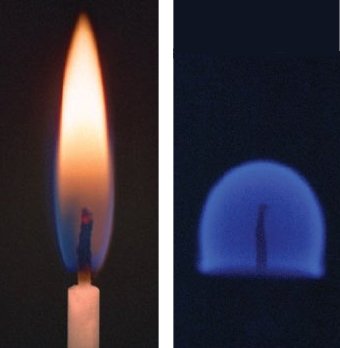 Figure 6. A burning candle under the influence of earth’s gravity, and in the absence of gravity; diameter 5 mm.
This photo was taken with a very long exposure time, because the blue candlelight was very weak, and barely discernable with the naked eye by astronauts. © NASA

The most conspicuous differences between flames in the presence and absence of gravity have to do with flame color and form. In a gravity-free environment, candles burned with hemispherical bluish flames which emitted so little light that astronauts had trouble even recognizing that they were burning. On earth, if a burning candle is placed in a large desiccator, and the pressure is subsequently reduced, the resulting flame gradually comes to resemble those observed in space, but the reasons for the change in this case are very different: reducing the air pressure increases the rate of diffusion, but it reduces convection flow, and reduces above all the oxygen partial pressure. As a result, oxidation reactions proceed more slowly, so the flame becomes cooler; for this reason there is also no soot formation, so the typical sort of light emission is absent.

What causes the differences between a burning candle with vs. without gravitational influence?

Supplying a candle flame with fuel depends upon the capillary effect of a wick. Gravity has no effect on capillary forces, but the same cannot be said about the provision of oxygen. In the presence of a gravitational field, oxygen is transported to a candle’s reaction zones by diffusion and by convection, both of which transport mechanisms are also responsible for removing newly-formed combustion gases. Gravity has no influence on diffusion, but convective transport disappears completely in the absence of gravity, since hot gases from a flame will no longer rise up (and where, by the way, is up in this situation?) [13].

The form of the resulting flame is approximately hemispheric. In a gravitational field, the elongated flame shape we associate with a candle is a consequence of ascending flame gases and of fresh air being sucked in from below. Both effects disappear in the absence of gravity, so only diffusion is left to supply oxygen to the reaction zone. Because the oxygen influx is curtailed, exothermic oxidation reactions proceed more slowly, and the temperature of the flame is significantly reduced. This in turn influences virtually every physical-chemical process associated with a flame. One consequence, incidentally, is that the candle is consumed much more slowly.

Such a flame is no longer characterized by the familiar yellow glow, which means larger soot particles must not be forming, and there is thus no soot accumulation on the walls of the container. The lower flame temperature is apparently insufficient for development of primary soot particles, hence the flame is blue. This is to say that all visible light emerging from the flame is due to excited C2* and CH* molecules from within the reaction zones.

Chemistry of the Christmas Candle — Part 1

When we light a candle, the chemistry we are pursuing is not only especially beautiful, but also especially complex chemistry

Chemistry of the Christmas Candle — Part 2

When we light a candle, the chemistry we are pursuing is not only especially beautiful, but also especially complex