The 18th European Symposium on Organic Chemistry (ESOC 2013) was held in Marseille, France, in July. This largest scientific European event in organic chemistry gave academics and young researchers from around the world opportunity to discuss the latest research and future trends. Organic chemistry moves towards a multidisciplinary environment blending biology, physics, and materials sciences. 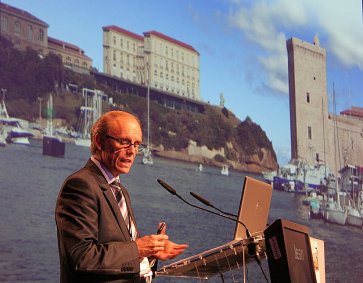 The first presentation was the Lilly European Distinguished Lectureship Award 2013 given by Professor Ben L. Feringa (pictured, below), University of Groningen, the Netherlands. He talked about the design, synthesis, and functioning of rotary and linear molecular motors. In his molecular systems, molecular dynamics is coupled to specific functions. Major 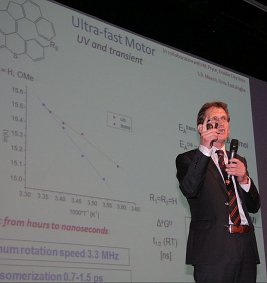 challenges are the design of kinetic driven processes as well as the control of the translational and rotary motion.

Optical molecular switches allow control of the function and assembly of molecules in a non-invasive manner. Progress in the design of dynamic molecular systems is made to achieve autonomous motion. Responsive behavior in molecular systems may be used for data storage, electronic communication, regulation of transport through protein channels, and catalysis.

“Surprising C–H Activation” was the title of the talk of Professor Frank Glorius, Westfälische Wilhelms-Universität, Münster, Germany. Non-acidic C–H bonds have often been considered to be less reactive or even inert. However, being able to utilize them, results in increased levels of efficiency and simply new transformations. Glorius identified mild transformations, non-chelate assisted (undirected) C–H activations, and C–H activations for the efficient formation of heterocycles as important trends.

Professor Fernando P. Cossio, Universidad del País Vasco, San Sebastián, Spain, emphasized the benefit of computational chemistry in modern organic synthesis. Under certain conditions, the stereocontrol in the catalytic asymmetric synthesis of unnatural prolines via (3+2) cycloadditions can be extremely high. The site-, regio- and stereochemical outcome can be predicted by computational methods. Cossio presented results in the design and synthesis of L- and D- ferrocenyl prolines, their use as chiral catalysts in (3+2) cycloadditions, and the interplay between the chiral proline moiety and the planar chirality of the ferrocenyl substituent.

Tuesday afternoon’s session was dedicated to the 50th anniversary of Wiley’s book series “Patai’s Chemistry of Functional Groups”. Founded in 1964 by the late Professor Saul Patai, it is one of chemistry’s landmark book series. It covers all aspects of the chemistry of functional groups with a strong emphasis also on the relation of the functional group to the molecule as a whole.
After having served as Editor-in-Chief for many years, Professor Zvi Rappoport (photo below), Hebrew University of Jerusalem, Israel, symbolically turned over the position to Professor Ilan Marek, Israel Institute of technology, Haifa, Israel. Unfortunately, Marek had to cancel his attendance at the last minute.

The scientific program of the Patai anniversary session spanned from a plenary lecture given by Professor Eiichi Nakamura, University of Tokyo, Japan, to an invited lecture held by Professor Jeffrey W. Bode, ETH Zurich, Switzerland.

Eiichi Nakamura addressed design of molecules and control of molecular organization in a nm-thick film as the major problems in organic solar cell research.
“Organic chemists may consider that they are the experts in the first area.” But with porphyrine being the only natural model, “we must use our own imagination on molecular design rather than going through the natural repertoire of organic molecules.”
To make the best use of the best molecule, the hierarchical organization of several different molecules in a nm-thick film must be controlled. This is an entirely new concept to scientists and engineers. An additional problem that organic chemists have never seriously thought about is the durability of the molecules and molecular organization under light and heat irradiation over 10 years.

As a result of ten years of research, the best power conversion efficiency achieved in the laboratory is surpassing the best data for amorphous silicon solar cells.

A highlight of the Patai anniversary was the huge custom-made birthday cake. It was served to all participants during the coffee break. 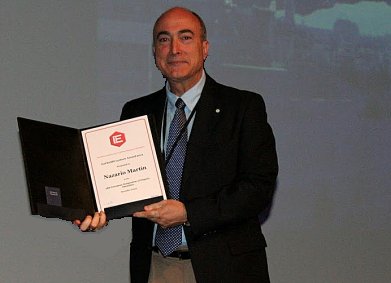 titute for Advanced Studies in Nanoscience (IMDEA), Spain, have been elected as the 2012 EuCheMS Lecturers. David Milstein already held his lecture at the 4th EuCheMS Chemistry Congress in Prague, whereas Nazario Martìn gave a lecture on enantioselective synthesis of carbon nanofoams at this conference.

Winners of the poster and oral communication awards.

During this excellent and well-organized event it was announced that Professor Antonio Echavarren, Institute of Chemical Research of Catalonia, Tarragona, Spain, will be the next chairmen of ESOC’s international scientific committee. He succeeds Professor Max Malacria, Université Pierre et Marie Curie Paris 6, France. 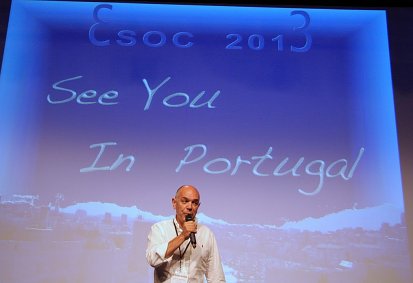