2. The Discovery of Vitamin C

The fact that the molecular cause of scurvy – a vitamin C deficiency – took so long to be recognized was due in large part to the absence of a laboratory animal suitable for studies. Rats, mice, and rabbits don’t contract scurvy. It was thus a real godsend that, in 1907, Axel Holst and Theodor Frölich, Institute for Hygiene and Bacteriology, University of Oslo, Norway, accidentally discovered that, with an appropriate diet, guinea pigs do develop scurvy [1].

How great a fluke this discovery was, is apparent from the background [10]. Holst and Frölich were studying diseases encountered in the course of long voyages by Norwegian cargo ships. Thanks to daily rations of lemon juice, scurvy was not among those diseases, but the so-called “ship beriberi” was. The latter disease also affects pigeons if their diet is limited to wheat bread, which was the principle staple in the diet of Norwegian seamen.

e now know that beriberi results from a lack of vitamin B. Pigeons display the typical symptoms of polyneuritis, an inflammatory disease of the nerves, which rapidly proves fatal.

To confirm their hypothesis that beriberi is due to a dietary deficiency, Holst and Frölich, were seeking a laboratory animal more closely related to man, for further experimental studies. Their choice was the guinea pig, but to their great surprise a diet of wheat bread produced in this case not beriberi, but instead the typical symptoms of scurvy: bleeding gums, fragile bones, and internal hemorrhaging. Pigeons are in fact incapable of contracting scurvy because, like most birds, they are able to synthesize vitamin C themselves.

In 1907, the two Norwegians published their results. By using guinea pigs as subjects they demonstrated, without a doubt, that scurvy could be cured immediately by the consumption of fresh fruits and vegetables [11].

Now that a suitable laboratory animal had been discovered, both the causes and appropriate therapies for scurvy could be systematically investigated. Holst and Frölich were soon able to show, for example, that although fresh potatoes were effective against scurvy, dried potatoes were not.

Around 1920, compounds with the names “vitamin A” and “vitamin B” were already in common parlance, so the new “anti-scurvy factor”, apparently present in certain fruits and plants, earned the name “vitamin C”. The race was now on to isolate, determine the structure, and synthesize this new vitamin.

In particular, the research groups of Soloman Zilva, Lister Institute in London, UK, and Charles King, Pittsburgh, USA, worked feverishly on the isolation of the target compound from lemon juice. The principal analytical problem, in this case, was separation of vitamin C from the numerous sugar derivatives also present in fruit juice.

The victor in the contest to isolate vitamin C ultimately proved to be a complete outsider: the Hungarian biochemist Albert Szent-Györgyi, working in the laboratory of Frederick Gowland Hopkins [12] in Cambridge, UK. His original research interest had nothing to do with vitamin C, instead he was looking for a possible biochemical relationship between the skin tanning observed in patients suffering from Addison’s disease, and the browning of freshly-cut potatoes and apples. As Addison’s disease is caused by a malfunction of the adrenal gland, he began to look into the contents of this gland.

After a great deal of effort he was able to isolate from this source a compound with reductive powers. Thus:

From many kilograms of adrenal glands, Szent-Györgyi was ultimately able to isolate a single gram of the yellow compound; as it decolorized an iodine solution, it was appropriately called “reducing factor”. Szent-Györgyi determined the molecular weight of the yellow compound to be 180 g/mol which, together with an elemental analysis (C: 40.7 %, H: 4.7%, O: 54.6%), indicated a molecular formula C6H8O6.

Hopkins urged his co-worker Szent-Györgyi to publish his results right away, because both believed they had identified a new adrenal hormone.

Publication in the Biochemical Journal presented problems, however, because Szent-Györgyi proposed “ignose” as the compound’s name. Through a witty English play on words, Szent-Györgyi was attempting to suggest the as-yet-unknown nature of the structure (“ig” = anti and “nose” sounds like “knows” when spoken); at the same time, the ending -ose implied that the “reducing factor” was a carbohydrate.

The editors of the Biochemical Journal found this idea not at all amusing, however, and firmly rejected the suggested name. Szent-Györgyi next proposed the alternative name “godnose”, at which point the editors threatened to deny publication of the entire article, though they did offer a possible name of their own: hexuronic acid. Szent-Györgyi finally gave in, and the paper indeed appeared, in 1928, under the title “Hexuronic Acid” [13].

Szent-Györgyi next pointed out that the reducing power of freshly squeezed lemon juice might also be due to hexuronic acid.

In 1929, Szent-Györgyi moved to the Mayo Clinic in Rochester, Minnesota, USA, where he had access to the enormous slaughterhouses in nearby St. Paul, and thus to a nearly inexhaustible supply of fresh adrenal glands.

4. Determination of the Structure of Vitamin C

4.1 Adrenal Glands
In all, he now isolated 25 g of hexuronic acid, half of which he sent to Sir Walter Norman Haworth [14] in Birmingham, UK, who wanted to determine the structure. Unfortunately, the sample was insufficient for all the necessary degradation reactions, so the structure of the compound remained, for the time being, obscure.

In 1930, Szent-Györgyi returned to Hungary and the University of Szeged, shortly thereafter to be joined by Joe Svirbely. The latter had previously attempted, as a member of Charles King’s group in Pittsburgh, to isolate vitamin C from fruit juices. Szent-Györgyi wrote [15]:
“One day, a nice young man, J. Svirbely, Hungarian but born in America, came to Szeged to work with me. When I asked him what he could do, he said he could find out if a substance contained vitamin C. I still had about a gram of hexuronic acid, so I gave it to him to test its activity. I told him that I anticipated it would prove to be identical to vitamin C. I had always strongly suspected this to be the case, but had never tested it. I was not familiar with any animal studies in this area, and for me the entire problem was too glamorous. To me, vitamins appeared quite uninteresting from a theoretical perspective. “Vitamins” meant, “something you had to eat”, and what you must eat is primarily a matter for cooks, not scientists.”

Szent-Györgyi had been correct in his suspicions; through animal experiments, Svirbely was able to show in the spring of 1932 that hexuronic acid from adrenal glands of cattle was indeed physiologically identical to vitamin-C-containing extracts from citrus fruits. As a way of expressing its anti-scurvy activity through its name as well, Haworth and Szent-Györgyi proposed, in one of the shortest scientific publications ever, that hexuronic acid be renamed ascorbic (without scurvy) acid.
“In view of the facts that (i) hexuronic acid is the name of a class of substances rather than that of one individual compound, and that (ii) the material described as hexuronic acid isolated from adrenal cortex and now from paprika contains a molecule of water less than is required for a hexuronic acid, we wish to ascribe the name ascorbic acid to the crystalline substance C6H8O6, which has been the subject of earlier communications from our laboratories.” [16].

Out of loyalty and fairness, and with the approval of Szent-Györgyi, Svirbely informed his previous mentor, King in Pittburgh, in detail about his handsome success. He mentioned that a corresponding report was already planned for the English journal Nature. This openness proved to be a mistake, though, as King then immediately sent a communication of his own to the American journal Science, in which he reported that he had first isolated vitamin C, and that it was completely identical to hexuronic acid. King did indeed cite previous works of Szent-Györgyi, but made absolutely no mention at all of this latest personal communication from his former student. Szent-Györgyi, a spirited, fun-loving, and open scientist, who always shared what he knew with others, was understandably shocked, and temporarily lost his faith in the candor and honesty of the scientific community.

But the Nobel Committee in Stockholm recognized Szent-Györgyi’s priority, and awarded him the Nobel Prize in Physiology or Medicine in 1937.

4.2 Peppers
Owing to the fact that Svirbely had fed all of the hexuronic acid to guinea pigs, and because there were no large slaughterhouses in Szeged, Szent-Györgyi was forced to look for a new source. As a Hungarian he was, sooner or later, guaranteed to study bell peppers, and as one deserving of a lucky break, he discovered that not only did these peppers contain an especially large amount of vitamin C, they, more importantly, lacked any other sugars that would interfere with its isolation. Within a week he was able to isolate nearly a kilogram of crystalline vitamin C from peppers, and once again to send a large amount to Birmingham for Haworth, who was now finally able to establish the structure of the compound through a comprehensive set of degradation reactions [17, 18].

4.3 L-Ascorbic acid
L-Ascorbic acid is a sugar derivative, where the label “L” – based on a scheme devised by Emil Fischer – refers to the configuration of the hydroxy group on the carbon atom most distant from the most highly oxidized chain terminus, in this case C5. L-Ascorbic acid, despite its name, is not a carboxylic acid, however, instead it is a C(3) enediol group that has a pKa value comparable to that of a carboxylic acid, because the negative charge in the ascorbate anion (2) is also distributed over multiple oxygen atoms (Fig. 1).

Haworth was hoping to top off his structure determination with a synthesis [19], but found himself in a race with Tadeus Reichstein and Paul Karrer in Switzerland, both of whom were close on his heels. Reichstein was initially in the lead, as in 1933 he succeeded — starting from galactose — in synthesizing the enantiomer, namely D-ascorbic acid [20]. As a result, Haworth spurred his group on (in almost military fashion!) to maximum achievements. Work was pursued around the clock, to the point of exhaustion. We know from reports of those involved that phenylhydrazine was utilized in one of the important intermediate reactions, with the result that, not only were the co-workers drained physically, but they also suffered from serious skin rashes owing to the poisonous nature of the phenylhydrazine [21].

After months of hard work in the laboratory, they finally managed to synthesize a few milligrams of L-ascorbic acid. For his scientific achievements, Norman Haworth, together with Paul Karrer, was awarded the 1937 Nobel Prize in Chemistry, with Albert Szent-Györgyi simultaneously obtaining the Nobel Prize in Physiology or Medicine.

About a year after Haworth, Reichstein, and Grüssner published a brilliant and extremely fruitful synthesis of vitamin C starting with glucose [22]. From this, the firm of Hoffmann–La Roche developed an industrial-scale preparation, on the basis of which over 60,000 tons of L-ascorbic acid are to this day produced annually [23, 24]. (Fig. 2; Synthesis: Considerations from a Chemical/Esthetic Perspective) 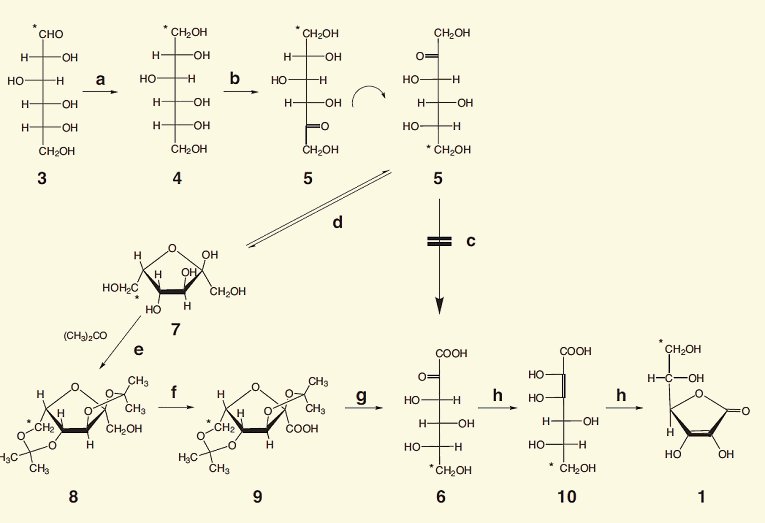 How much vitamin C do we need in our modern food?
(will be published in April 2014)