6. The Chemical and Physiological Properties of Vitamin C

From a chemical standpoint, ascorbic acid is a sugar derivative, and not the carboxylic acid that its name might suggest. Its relatively high acidity is instead a consequence of a rather unusual ene–diol structure. Upon deprotonation of the hydroxy group at C3, it becomes a resonance-stabilized anion. As a result, the dissociation equilibrium is shifted to the right (Fig. 1), giving a pKa that is indeed comparable to that of a carboxylic acid.

The reducing power of ascorbic acid is a decisive factor with respect to its physiological properties. Ascorbic acid, or rather the ascorbate anion, oxidizes in two steps, first to the ascorbate radical and then to dehydroascorbic acid (Fig. 2; for simplicity the radical intermediate is not shown). 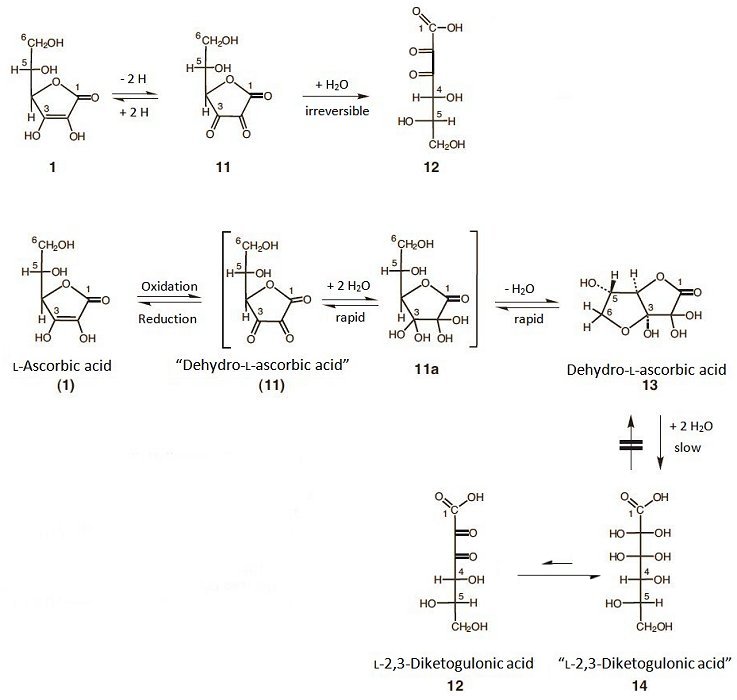 The reaction sequence 1, to 11, to 12 provides a summary of the chemical oxidation process: L-ascorbic acid (1) is oxidized through donation of two hydrogen atoms, first to dehydro-L-ascorbic acid (11), which is L-threo-2,3-hexodiulosonic acid γ-lactone, according to CAS terminology. A subsequent slow, irreversible (!) rearrangement of 11 to the inactive L-2,3-diketogulonic acid (12) explains the gradual loss of vitamin C in the body. Thus, the half-life of the mixture of 1 and 11 in blood plasma at 25 °C is only two hours [24].

This rather straightforward description found in many textbooks has only one small downside: its only correct feature is the structure of L-ascorbic acid (1)! Despite the fact that the errors have been known for decades [25], utilization of this conceptual scheme, with formulas radiating true didactic charm, thanks to their intelligibility, persists undaunted to this day. NMR spectroscopy studies revealed quite early on that dehydroascorbic acid exists not as diketone 11, but almost exclusively in bicyclic form 13, described by CAS as (3S)-L-threohexo-2,3-diulo-3,6-furanosono-2,4-lactone-2-hydrate. The “open-chain” L-2,3-diketogulonic acid (12) is actually present largely as 14, in CAS notation, L-threo-2,3-hexodiulosonic acid γ-lactone-2,3-dihydrate, although the keto groups at C2 and C3 are hydrated [28].

The ascorbic acid/dehydroascorbic acid redox pair plays a prominent role in both plant and animal metabolism. Oxidizing and reducing agents provide for facile and reversible intracellular interconversion of the two compounds. As a result, both are able to show antiscurvy (antiscorbutic) activity.
Strictly speaking, the term “vitamin C” should be used for the aggregate of ascorbic acid and dehydroascorbic acid.

In our bodies, ascorbic acid fills diverse roles, whereby it is neither a substitute for a material the body cannot synthesize on its own, nor is it incorporated in an obligatory way into human metabolism. Only the redox pair ascorbic acid/dehydroascorbic acid in various ways controls, or in some cases actually makes possible, certain chemical metabolic processes (Table 1).

Ascorbic acid plays an especially prominent part in the makeup of connective tissue. By connective tissue we mean a very heterogeneous class of tissue serving as the basis for our muscular-skeletal system, a class from which tendons, ligaments, cartilage, dermis, and subcutaneous tissues are formed, as well as heart valves and intervertebral discs. Such tissue consists of an extensive three-dimensional fibrous network of proteins and polysaccharides, in which connective tissue cells are embedded only sporadically. Here, a central role is played by the fiber-forming protein collagen, 27 different types of which are found in mammals. All 27 consist of left-handed helical protein chains, braided into right-handed triple helices approximately 300 nm long (Fig. 3, left-hand side). 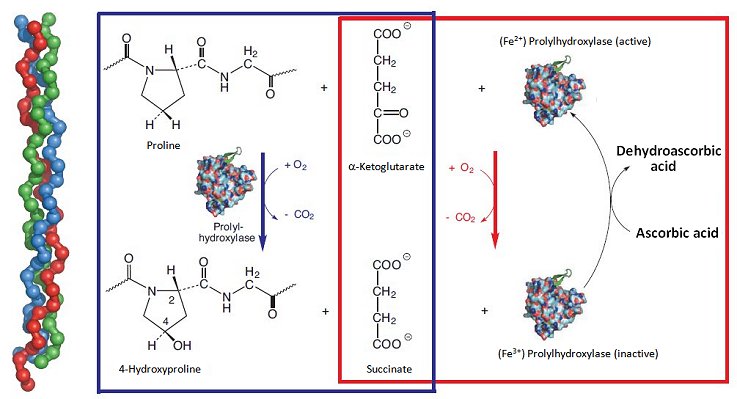 Figure 3. The significance of L-ascorbic acid in the construction of connective tissue.

This unusual, tightly-wound triple helix system is possible only owing to incorporation of numerous glycine units (–(NH–CH2–CO)–), which represent the smallest of the amino acids and also occupy the least space. In the individual collagen protein chains there are hundreds of –(NH–CH2–CO)–X–Y–(NH–CH2–CO)–X–Y– sequences, where X stands for proline and Y for hydroxyproline. Between the individual protein strands, strong hydrogen bonds form between hydroxy groups of hydroxyproline units, and these are in turn responsible for collagen’s mechanical stability. Collagen is in fact the most abundant (25 %) protein in the human body.

In terms of the process of biochemical construction, procollagen is formed first. This is subsequently transformed by an oxidative “curing process” into collagen itself, in the course of which process proline units are hydroxylated to a considerable extent. The oxidation is catalyzed by the enzyme prolylhydroxylase; at each stage, an oxygen molecule is required, where one of the oxygen atoms ends up on a proline residue and the second accomplishes an oxidative degradation (decarboxylation) of α-ketoglutarate to succinate (Fig. 3; blue box). In this reaction sequence, there is no need whatsoever for a reducing agent, such as ascorbic acid, but it is accompanied by a parallel side reaction [29]. The side reaction also involves an oxygen molecule, where one of the oxygen atoms is again used for oxidative degradation of α-ketoglutarate to succinate, but the other oxidizes an Fe2+ ion present in prolylhydroxylase to Fe3+ (Fig. 3; red box).

A fundamental difference exists between these two reaction sequences: in the sequence in which the proline hydroxylation is coupled to formation of succinate (Fig. 3; blue box), prolylhydroxylase functions as catalyst, for exclusive degradation of α-ketoglutarate; but it is also a true reaction partner, as active Fe2+-enzyme is oxidized to inactive Fe3+-enzyme; i.e., enzyme is “used up”. And this is where ascorbic acid makes its appearance: the reducing agent transforms inactive Fe3+-enzyme back into active Fe2+-enzyme, thereby recycling the enzyme. In this way, ascorbic acid guarantees the presence of a constant, high level of active prolylhydroxylase. This indirect chemical mode of action is typical, incidentally, for a host of reactions dependent on ascorbic acid.

Should there be a deficiency of ascorbic acid, the resulting shortage of active prolylhydroxylase leads to typical symptoms of scurvy: weakening of vessel walls and consequent chronic bleeding of delicate capillaries (e.g., in the gums, or in lower layers of the skin), as well as a considerably slow healing of wounds. The frequent bone fractures suffered by scurvy patients is also a consequence of collagen damage, because bones themselves are 30 % collagen [9].

A second chemical characteristic of ascorbic acid, or ascorbate anion, is facile oxidation to a radical, through loss of an electron. This single electron can be transferred especially easily to a highly reactive radical, where the resulting ascorbate radical is less reactive. Ascorbic acid is thus an effective radical trap, and within cells it is at the forefront of defense against oxidative stress. A typical example involves the recycling of vitamin E, which in cell membranes protects unsaturated fatty acids against oxidation (Eq. 1–6).

Cells in our bodies are surrounded by membranes composed of lipid double layers. A not insignificant portion of these lipids incorporate double bonds in the form of unsaturated fatty acid residues. Those fatty acid residues that contain multiple double bonds are highly susceptible to attack by reactive radicals and oxidizing metal cations. Here the first step is the splitting off of a hydrogen atom from a CH2 group, typically located between two double bonds (allylic to both: Eq. 1).

Things get worse, however, because the nonradical (but still highly reactive) hydroperoxide formed in reaction 3 can itself still attack a fatty acid residue, leading suddenly to two radicals (Eq. 4).

This reaction cycle is autocatalytic, which is to say it proceeds (indeed accelerates) without external intervention from an initiating radical. The result: acid residues are oxidized ever more rapidly, and the underlying membrane structure is ultimately destroyed [30].

The formation of radicals according to Equation (1) can admittedly not be prevented, but chain reactions and autocatalysis can be stopped through the presence of radical traps. This assignment is undertaken by α-tocopherol (vitamin E) dissolved in the membrane lipids. Tocopherol contains a phenolic hydroxy group that reacts with fatty acid radicals (Eq. 5).

The ascorbic acid radical is quite stable, hence relatively unreactive. It can be reduced again to ascorbic acid with a mild intracellular reducing agent, however, and thus also retrieved. Overall, through this complex interplay between vitamins C and E, it becomes possible to trap chemically aggressive radicals, and at the same time recover molecules that play a vital protective role.

It took hundred of years and a long sequence of small advantages and missed opportunities to discover the importance of vitamin C.

When scurvy was identified as a form of malnutrition, an exciting race for the isolation, structure determination, and synthesis of vitamin C started.

How much vitamin C do we need in our modern food?