Breast milk remains the “gold standard” of baby nutrition. In addition to water, lactose (which delivers energy), fats, and proteins, breast milk contains a number of other important components needed for the healthy development of an infant. One of these classes of biologically active substances is comprised of the human milk oligosaccharides (HMOs). In this part, we will take a closer look at how HMOs are synthesized.

Historically, extraction from breast milk was the first method for isolating HMOs. Because breast milk is only available in limited quantities, synthetic methods have been established as an alternate source of HMOs over the last four decades. These involve three different routes, sometimes used in combination: a) chemical synthesis, b) chemoenzymatic synthesis, and c) fermentative synthesis. Table 1 summarizes the significant advantages and disadvantages of these routes.

Table 1. Advantages and challenges of various methods of HMO synthesis.

To date, chemical synthesis has been used to produce more than 15 different HMOs [8, 9]: from trisaccharides (such as 2’-FL, 4) to octasaccharides. Because of the similar reactivities of the many hydroxy groups in sugar monomers (see Info Box 1), regio- and stereoselective chemical synthesis require careful strategic use of protective groups, in addition to activation of the functional groups to be used to form the linking bonds. Chemical synthesis, therefore, quickly leads to a high number of steps. While this can still reasonably be implemented on an industrial scale for “small” HMOs like 2’-FL (4) or 3-FL (15), it becomes increasingly less economical in comparison with the biotechnological alternatives described in the next chapter. Also, in some cases, steps such as the removal of protective groups may require toxic reagents, which are not suitable in the manufacture of food. 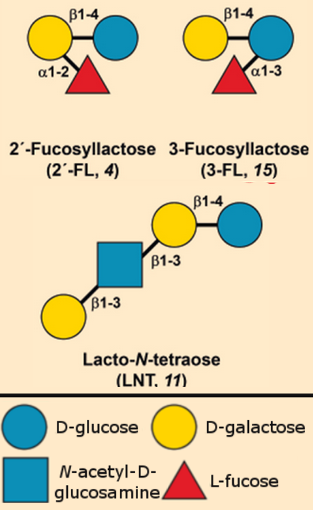 Automated Solid-phase Synthesis
For the rapid synthesis of small quantities of oligosaccharides, automated solid-phase synthesis is a good alternative. It is not labor-intensive because the intermediate products do not need to be isolated, and it is easy to separate out excess reagents and side-products. Another advantage of this method is the ability to quickly produce a variety of compounds that are very valuable for determining the relationships between structure and activity, as well as for use as clean, characterized analytical standards. Chemical HMO syntheses also allow for very high purity and the production of clearly defined oligosaccharides [8, 9].

Although the first chemical syntheses of HMOs (for example LNT, 11) stem from the 1980s, far ahead of the first biotechnological syntheses, commercial HMOs today are industrially produced by fermentative routes. Chemically synthesized HMOs generally cost far more than 500 Euro/Kg, making them too expensive for use in baby food. Biotechnological processes allow the costs to be reduced significantly.

Biotransformation
At first glance, it seems obvious to simulate biosynthesis to produce these substances in a targeted fashion. For a start, one could try to use known enzymes to carry out biosynthesis in vitro, meaning outside of a living organism. This type of process is called biotransformation. Unfortunately, total synthesis of complex structures is a major challenge with this technique. The hurdles will be difficult to overcome, especially from the economic standpoint.

Biocatalysis
Biocatalysis could also conceivably be used for individual steps of such a synthesis. The extraordinary selectivity of enzymes certainly suggests this approach for sugar chemistry. When such enzymatically catalyzed reactions are carried out outside of a living cell, it is necessary to take into consideration that some of the key steps in these syntheses are endergonic reactions, meaning that they are tied to an increase in the free enthalpy and do not occur spontaneously. To make these steps possible, the reactions must be coupled with exergonic conversions so that the overall reaction is thermodynamically favorable.

An example that clearly illustrates the advantages and disadvantages of purely biocatalytic HMO synthesis was published by Zhao et al. in 2016 [20]: An α-1,2-fucosyl transferase that uses GDP-activated fucose as a donor and then binds to the tetrasaccharide LNT (11) as an acceptor to form LNFP (14) was isolated from the bacterium Thermosynechococcus elongatus (see Fig. 4). 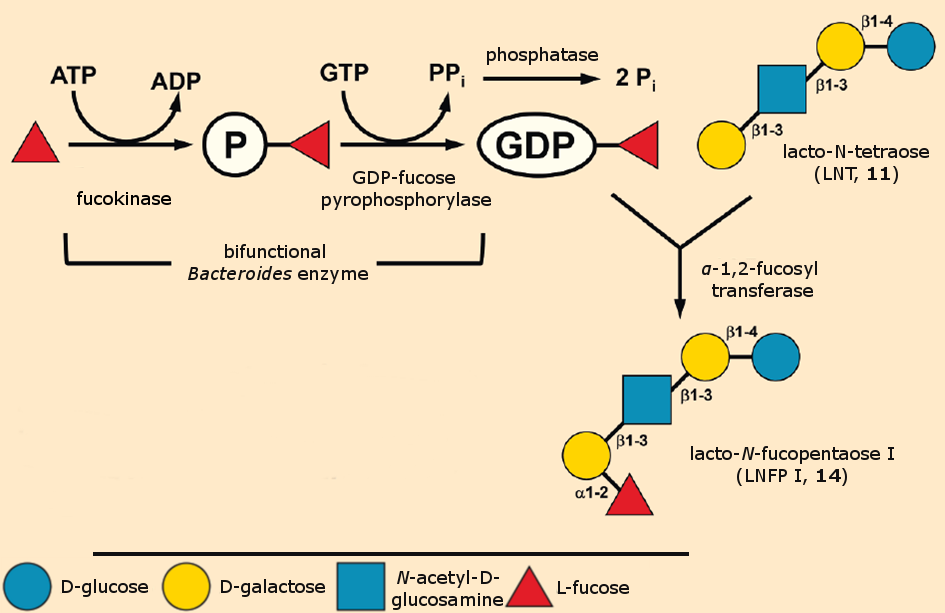 This reaction sequence was carried out on a gram scale. Like most glycosyl transferases, fucosyl transferases can only work when the sugar donor – in this case fucose – has been activated. To achieve this, a bifunctional enzyme from Bacteroides was used. In a first partial reaction, it phosphorylates fucose to fucose phosphate, and then converts this with GTP to GDP-activated fucose in a second step. This second reaction forms pyrophosphate as a byproduct. To push the reaction equilibrium toward the product side, a third enzyme – phosphatase – is used to hydrolyze pyrophosphate into two phosphate ions in an irreversible reaction (see Fig. 4).

This example clearly demonstrates the effort required to carry out enzymatic sugar syntheses outside of living cells: In general, the individual building blocks must be activated in an upstream reaction, and every individual link requires its own biocatalyst. Because HMOs have very heterogeneous structures, a correspondingly large number of transferase enzymes are required.

The literature also describes examples in which donor molecules in a form that does not occur naturally are enzymatically transferred to an acceptor. Organic synthesis makes unprotected and activated sugar derivatives such as p-nitrophenyglycoside or glycosylfluroide and -azide available. However, these are expensive to produce, and the leaving groups generated in the reaction are potentially toxic.

Mutants of some representatives of the hexose amidase class of enzymes can use sugar oxazolines as donors for the formation of glycosidic bonds [21]. The activation of GlcNAc (8) to oxazoline (18) can be fairly easily achieved chemically by established methods (see Fig. 5): either by a route without protecting groups using the Shoda reagent CDMBI (19) (2-chloro-1,3-dimethyl-1H-benzimidazole-3-ium chloride [22], or by a more complex protecting-group route involving acetylation, oxazoline formation, and deprotection [23]. 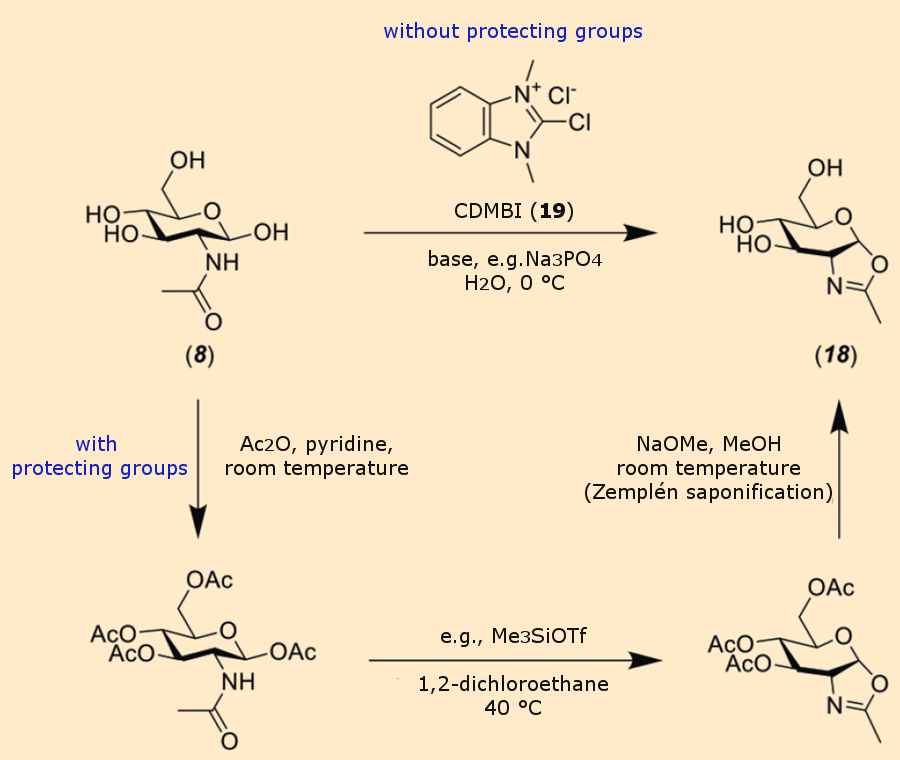 The combination of oxazoline chemistry and hexosaminidase-based biocatalysis could be an interesting approach for chemoenzymatic N-acetylglucoseamination.

In summary, purely enzymatic syntheses of complete HMOs are probably not economical. However, enzyme-catalyzed steps could be attractive for expanding complex HMOs with further sugar building blocks, or for selectively splitting complex HMOs at selected locations.

In contrast to cell-free biotransformations, fermentations always make use of intact, physiologically active cells. In a fermentation process, the endergonic reaction can therefore easily be coupled to exergonic reactions of the basal metabolism, which run in parallel and regenerate the cofactors. In addition, living cells can resupply cofactors and catalysts if these become unavailable through instability or deactivation.

Fermentations readily allow a variety of synthetic steps to be carried out in one microorganism. In this way, simple starting materials like glucose or lactose can be converted into complicated oligosaccharides.

Although fermentation involves sequences of many, partially highly complex reactions, from a process engineering point of view it involves a single step. This is a significant advantage over the organic synthesis of oligosaccharides, which in some cases requires additional processing between steps.

Biotechnological processes also stand out because they are carried out under “standard conditions”: energy expenditure for heating and the requirements for materials and apparatus construction are usually lower, which reduces investment and operation costs. One objection frequently – and often validly – raised to biotechnological processes is the fact that these are normally carried out in aqueous media, which can often result in subsequent complex product processing. However, in the context of synthesizing sugars for human consumption, an aqueous phase may also be an advantage because it is possible to avoid possibly critical organic solvents.

The advantages of modern biotechnology also make it possible to introduce complex synthetic sequences in microorganisms that do not naturally carry them out – or carry them out only in part.

The volume of DNA and protein sequence data has grown exponentially in recent years. Modern molecular biological processes make it possible to assemble genes from a wide variety of organisms into a host organism and translate them into functional proteins. Tailored microorganisms can practically be designed at the drawing board. Simple intestinal bacteria like Escherichia coli can be beefed up to produce precisely chemically defined HMOs from the simplest precursors. Literature reports describe strains of E. coli that can produce over 20 g/L 2’FL (4) or LNT (11) [24, 25].

The fact that the biotechnological production of HMOs has reached industrial maturity is also made evident by the activities of various companies. For example, press releases from BASF SE reported that they have developed a fermentative process for the production of highest quality 2’-FL (4). The quantity and quality of the product meet the requirements of the global human food market [26, 27]. BASF acquired an EU Novel food authorization for this product and is pursuing additional global authorization. The Novel Food Regulation governs the handling of “novel foods” [28].

Which components are found in breast milk?

What are human milk oligosaccharides (HMO)?

Which effects do human milk oligosaccharides (HMO) have?