For a Japanese gourmet, winter is the most wonderful time of the year, because that is when the pufferfish, or fugu (its Japanese name) tastes best. Unfortunately, it’s also when it is at its most poisonous. The fugu poison, tetrodotoxin, falls very near the top of the international hit parade of poisons.

4 What to Do if One’s Fugu Banquet Seems Not to Sit Well?

Every year, roughly 50 people die after indulging in fugu. Almost all the fatalities occur in remote, rural parts of Japan. The victims will not generally have eaten fugu in a restaurant, but instead acquired the fish privately, and gutted and cooked it themselves.

The last casualty involving a restaurant patron occurred almost 40 years ago, and it shocked all of Japan, since the victim was the revered Kabuki actor Mitsugoro Bando VIII, who held the honorary title “Living National Treasure”. In a Kyoto restaurant in 1975, he insistently requested kimo, the liver of the fugu, an especially treasured delicacy. He had often done so in the past, apparently under the (unfortunately!) widespread delusion that — properly prepared — fugu liver is nontoxic. In truth, this is the organ with the very highest content of tetrodotoxin. Bando polished off not one, but four portions: obviously too much, since he died within hours. The fugu chef involved promptly lost his license, and was sentenced to eight years in prison (though that sentence was later suspended). Serving fugu liver is now absolutely forbidden by law, and members of the imperial family are not allowed to eat any part of the fugu. 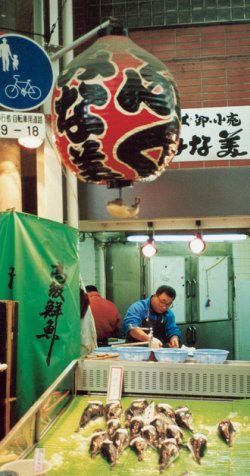 From a statistical standpoint, savoring a fugu meal in a reputable restaurant is utterly harmless, but only statistically, because one can never know for sure. Japanese enjoy citing in this context the sarcastic maxim: Ataruto, ippatsu di chinu (“It takes only one bullet to get killed”).

With just a mild case of poisoning, a fugu aficionado can anticipate wrapping up an otherwise pleasant evening more or less as follows: a quick trip to the nearest hospital, then induced vomiting, oral administration of 50 g of activated charcoal, several hours of artificial respiration in the intensive care unit, and release after a few days [14], with assurance from the medical staff that one probably need not fear long-term adverse consequences.

5 Why Do the Japanese Eat Fugu?

The answer to this question is both simple and complex, because many factors can play a role:

1. There is a belief, for example, that fugu is an aphrodisiac. This is not actually the case, but belief alone suffices to attract a largely male following into the restaurants.
2. Most people find participating in a kind of “Russian roulette” to be more exciting than their everyday, boring existences.
3. Fugu is expensive: extremely expensive. High price alone — whether justified or not — causes many things in life to become desirable.
4. Fugu tastes superb. Perhaps not on the very first occasion, but many Japanese ultimately come to rave about the associated great sensual pleasure.

The most crucial factor may simply be that a fugu meal is an important social event: a kind of “pleasure-happening”. The accompanying atmosphere tends to be thrilling from the outset, with much laughter around the table as well, where sake consumption of course plays its part. After the very first swallow of hirezake someone in the party is likely to swear that his lips and tongue are already beginning to feel numb. From a group-dynamics perspective, communal “survival” of a fugu feast enhances the overall sense of solidarity, and the mere invitation to participate is taken to be an honor.

The Chemist’s Fear of the Fugu — Part 1

The Chemist’s Fear of the Fugu — Part 3

Klaus Roth considers the poison tetrodotoxin from the fugu’s perspective