For a Japanese gourmet, winter is the most wonderful time of the year, because that is when the pufferfish, or fugu (its Japanese name) tastes best. Unfortunately, it’s also when it is at its most poisonous. The fugu poison, tetrodotoxin, falls very near the top of the international hit parade of poisons.

6 Tetrodotoxin From the Fugu’s Perspective

Let’s take a moment to consider tetrodotoxin from the point of view of a fugu. Most important for the fish is the substance’s function as a defensive poison, with which the fugu’s chances for survival are considerably improved. Tetrodotoxin is lethal to almost all other animal species. The fugu must have really exerted itself in learning how to synthesize this strangely complicated tetrodotoxin molecule. 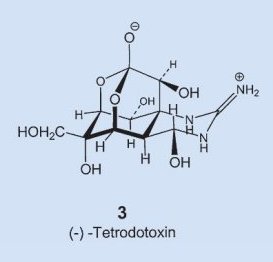 In structure 3 one immediately recognizes as structural elements a sugar and the guanine group, familiar from the amino acid arginine, but how everything gets assembled into the molecule’s unique hemilactal architecture is still today a complete mystery. In fact, the experts are not yet even sure if the fugu itself can actually synthesize tetrodotoxin, or if it instead ingests it through a food source, or allows some symbiotic organism to prepare it.

A first clue comes from the overall distribution of tetrodotoxin within the animal kingdom. This poison is found not just in pufferfish from the Indian and Pacific Oceans [15, 16], but also in the parrot fish, Taiwanese guppies, arrow poison frogs of the genus Atelopus in Costa Rica, the blue-ringed octopus (Hapalochlaena maculosa) from Australia, certain Japanese mussels, sea snails, and starfish, a few types of Philippine crabs, and a California newt (taricha torosa). It seems unlikely that in the course of evolution six different animal classes would have developed a way to make such a substance independently of one another [17]. This alone argues, in fact, for a symbiotic species of some sort living within the fugu.

A very similar distribution is observed in nature for another toxin: saxitoxin 6. This compound is actually very similar chemically to tetrodotoxin, it blocks sodium channels (see below) in the same way, and has pharmacological activity almost identical to that of tetrodotoxin. The agent saxitoxin causes a paralytic muscular poisoning in epidemic proportions annually, accompanied by numerous deaths. Here, the biosynthetic culprit is known: flagellate-bearing algae (dinoflagellates) that migrate by way of the food chain into certain mussels, and then cause the poison to accumulate [18]. 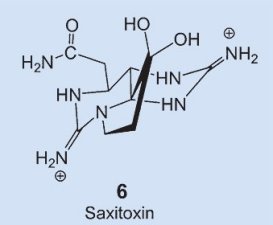 Since some believe fugu raised in a controlled manner on fish food do not contain tetrodotoxin, there would appear to be an open-and-shut case: a biosynthetically clever single-cell organism must be responsible here for the tetrodotoxin production. Various bacteria were at first suspected, since in a few studies tetrodotoxin was shown to be present, for instance, in Pseudomonas and Vibrio alginolyticus [19], and what’s more, both of these bacteria had also been isolated from fugu samples. Results from the studies later came to be questioned [20], however, since the chromatographic proof of tetrodotoxin’s presence was not unambiguous, and a much more sensitive in vivo test involving mice proved negative. Moreover, it has been shown in the meantime that fugu raised in a truly controlled environment on fish food are indeed able to synthesize tetrodotoxin themselves, albeit only in small quantities [21].

In other words, it remains unclear whether fugu alone are responsible for their tetrodotoxin supply, or if they rely on tiny assistants for help. In any event, it turns out that fugu utilize their poison not only as a defensive weapon, but also as a sophisticated pheromone. Eggs of the pufferfish Fugu niphobles, after they are laid, emit a little tetrodotoxin, which strongly attracts males of the species. The males, in turn, are able to sense an extremely low poison concentration of 5 ng/L [22], and can thereby ferret out and fertilize the eggs!

On another subject, Fugu rubripes happens to be endowed with a very compact genome. While the number of fugu genes is comparable to the number for humans, fugu DNA is only one-eighth as large. This is possible because of the many unused segments in human DNA: so-called “junk DNA” that contains no coded genetic information. This very compactness led Sidney Brenner in 1993 to suggest sequencing of the fugu genome, a task completed in 2002 [23].

Comparison of the human and fugu genomes sheds interesting light on the (limited!) extent of evolutionary changes since our common ancestors diverged some 400 million years ago. Most human genes turn out to have direct counterparts in the fugu genome [24], despite the fact that with a few exceptions, such as the genes for the immune system, the two species differ greatly in regulation of metabolism and other physiological systems. Genome comparisons have made it possible to identify 1000 genes in both species. Quite remarkably, it turns out that large DNA segments, embracing many genes, have actually remained unchanged in both fugu and humans over the course of over 400 million years.

In the opinion of Japanese gourmets, a fugu chef reaches the very pinnacle of his culinary art when some of his guests can begin to sense the first effects of tetrodotoxin, but without suffering any harmful consequences. The delight in such a culinary stroll along the edge of death can be heightened further, if the fugu-afficionado is at the same time aware of certain basic chemical facts:

A fugu meal presents the nerves with more than simply titillation. The poison tetrodotoxin actually causes changes in the function of certain nerve cells — the neurons. As with all cells, the cell membrane of a neuron is almost impervious to both polar molecules and ions. That means that uncontrolled passage of such substances in and out of a cell simply cannot occur. Polar molecules and ions pass through a cell membrane only via specific channels that have been opened, or with the aid of designated pumps or carriers.

The principal function of a neuron is the further relaying of stimulus signals. For example, if you touch something hot with your finger, it is obviously important that information about the event be passed along to your brain, and subsequently — after processing — back to the appropriate hand and arm muscles so you can pull your finger away in a timely fashion. To protect the individual from harm, all this must transpire very quickly [25].

Table 1. Ion concentrations on the inside and outside of a cell membrane.

In reality, no membrane is totally impervious. There are certain proteins embedded in the neuron membrane, for example, with the aid of which potassium ions are able to migrate from one side to the other. Proteins of this type are referred to as potassium channels [26, 27]. Since according to Table 1, the potassium ion concentration is higher inside (125 mM) than outside (5 mM), K+ ions regularly migrate through the K+ channels from the side of higher to that of lower concentration (i.e., from inside to outside). Since neither Na+ cations nor A– anions can pass through the membrane in this way, migration of K+ ions alone leads to an excess of negative charges on the interior side of the membrane, and thereby to a negative membrane potential. Note that — fundamentally — only potential differences can be measured. The extracellular potential has been defined as 0 V, so outward migration of K+ ions must lead to a negative potential difference, hence a negative membrane potential.

The more K+ ions that wander outward, the more negative the membrane potential becomes. Ultimately, an equilibrium value of ca. –70 mV is established, at which point the diffusion tendency along the concentration gradient equals the electrical attractive force of the inner (negative) side of the membrane toward K+ ions that have migrated outward. This equilibrium potential of –70 mV is known as the resting potential. (Membrane potentials are rather easily measured today using microelectrodes [28].)

Achieving the resting potential requires passage of only a few K+ ions through the membrane. With a typical neuron this reflects migration of only 10–7 mMol of K+ ions. For comparison purposes: recall that the intracellular K+ concentration is 125 mM, i.e., nine orders of magnitude greater.

8.2 So how is it that nervous conduction develops along a neuron?

Imagine at the end of a neuron, at the junction (synapse) with the next neuron, an impulse being passed to that next neuron by means of a chemical signaling agent — a neurotransmitter — which causes a momentary decrease in the membrane potential from –70 mV to ca. –60 mV. This small change is sufficient to activate a second category of ion channels: the potential-driven sodium channels. These Na+ channels remain closed at a potential of –70 mV, but they open abruptly at –60 mV. Na+ ions then stream rapidly along the concentration gradient from outside to inside. They are driven on the one hand by the concentration gradient itself, but in addition by the negative charge excess within the cell. The membrane potential collapses quite suddenly, and in fact climbs all the way to +50 mV (depolarization).

This increase in potential, known as an action potential, is very short-lived, because the newly-opened Na+ channels close again in less than 1 ms. Simultaneously, additional (potential-controlled) K+ channels open, and K+ ions stream rapidly outward from within until the resting potential has again been established. The entire phenomenon lasts only about a millisecond.

The rate at which an action potential zooms along a neuron ranges from 10 to 300 km/h, and the process can repeat itself after a delay of only a few milliseconds. The phenomenon is described as a neuron’s having “fired”. With every action potential, a small amount of K+ migrates out from the inside, and a small amount of Na+ from outside in. During the subsequent resting phase, a Na–K pump driven by ATP simultaneously moves K+ in and Na+ out until the original concentrations have once again been achieved. By the way: a significant fraction of one’s daily energy requirement is actually expended in simply maintaining the ion gradients in cells (and not just in neurons).

Ref. [29] offers an especially readable introduction to the neurochemistry of poisons derived from snakes, scorpions, and other living creatures.

Tetrodotoxin binds perfectly to typical sodium channels, and thus blocks their opening. This means that an arriving neuronal stimulus cannot be passed along, since the influx of Na+ ions is completely prevented, and no action potential can develop (see Fig. 4). 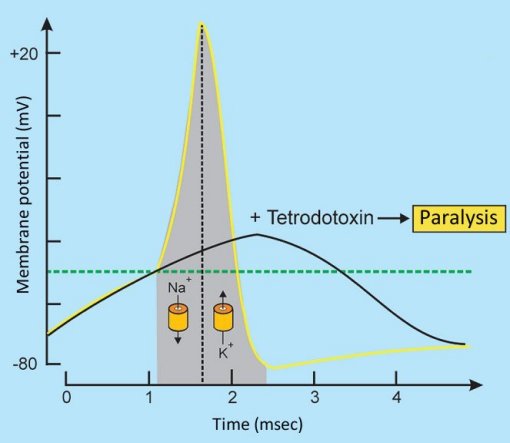 Tetrodotoxin is an ideal local anesthetic, since its use means that pain stimuli, for example, cannot be transmitted. For obvious reasons, the fugu has Na+ channels at which tetrodotoxin cannot bind. A slight change in the structure of a channel protein has thus made the fugu immune to its own venom. We humans unfortunately do not share this immunity, and a chemically-aware fugu gourmand becomes conscious very quickly of plugged sodium channels — and in fact relishes the sensation.

The effect itself commences with a slight tingling and numbness in the lips and fingers. It feels just like when the dentist administers a local anesthetic. Things become precarious, however, when one’s fingers get completely numb and can no longer be controlled. If the chopsticks fall from a guest’s hand in a fugu restaurant, it suddenly gets deathly quiet, and the kitchen staff is thrown into a tizzy. Nevertheless, you shouldn’t be overly nervous if sometimes this happens at a table near you, because deliberately dropping one’s chopsticks is a beloved practical joke, often played by badly brought up, somewhat tipsy patrons.

The Chemist’s Fear of the Fugu — Part 2: What to do if one’s fugu banquet seems not to sit well?