Sparkling Wine, Champagne & Co – Only Chemistry Can Be This Tingling

A glass of sparkling wine or champagne is the preferred drink for the truly extraordinary moments in our lives. The connoisseur begins celebrating and enjoying with the opening of the bottle, carefully pouring the contents into the proper glass and then admiring the color, the aroma, the taste, and, last but not least, the fizz.

Looking a bit deeper into the glass we discover that there is a great deal of chemistry involved, starting at the vineyard and proceeding on to the drinking of the sparkling wine or champagne, increasing our joy in it even more.

Alcoholic fermentation is the oldest biotechnological process employed by man.

It is the basis not only of producing wine and sparkling wine, but also brewing beer and baking bread. As summarized in the reaction sequence of Eq. (1), yeast cells decompose sugar in the absence of oxygen to give ethanol and carbon dioxide. The maximum alcohol content that can be achieved in this way is 14 vol %, since at a concentration this high the yeast cells are killed by their own metabolic product. In principle, after filtering out the yeast cells such wine is already suitable for drinking – but there’s a long way still to go in achieving a premium quality wine.

2. The Origins of Sparkling Wines

Fizzy wines have been known since antiquity, but they were — and generally still are — regarded as inferior, since such a wine was apparently bottled too early; i.e., before fermentation was complete, resulting in an unanticipated second fermentation.

Injuries resulting from exploding bottles were a familiar problem even in antiquity. It is obvious that at some time or other, some clever winemaker would have turned necessity into a virtue, and with the aid of a well-controlled second fermentation, developed an appealing, tasty new beverage. When this in fact occurred, and who first had the idea, is uncertain, thus providing a basis for splendid arguments:

This was a development that extended over many years, so that proclaiming 1695 as the year of Champagne’s birth appears somewhat arbitrary. The notion that upon discovering Champagne Dom Pérignon supposedly called out to his fellow friars: “Come quickly, brothers. I’m drinking stars!” is most likely only a cute anecdote. What is certain is that Dom Pérignon introduced the practice of second fermentation based on mixtures of different wines, as well as extra protection of the bottle closure with a cord around the neck. He is the one we can also thank for the standard bottle volume of 0.75 L, which he regarded as precisely the amount a man of the world in his day consumed with the evening meal. Today a premium Champagne label of the firm of Moët & Chandon is named for this very Dom Pérignon.

Actually, both the Englishman Merret and the Frenchman Dom Pérignon stood on the shoulders of giants, since monks from the monastery of Saint-Hilaire in Langedoc were producing a sparkling wine as early as 1561. Their method, which is still practiced, involved fermenting the wine very slowly at low temperature. After a certain time, fermentation is interrupted and the new wine is filtered and bottled. Traces of yeast in the sealed bottles cause fermentation to resume, and the resulting carbon dioxide dissolves under pressure in the wine. This leads to a very light wine with an alcohol content of only 6–7 vol %, with a powerful note of nutmeg. This is distinguished as the regional specialty “Blanquette de Limoux”, highly prized even today. 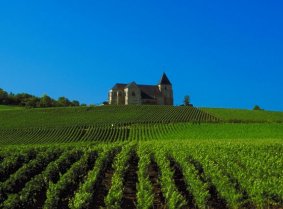 In what follows, we use the term “sparkling wine” to encompass the closely related products sekt, cava, spumante, crémant, Champagne, etc. The term “Champagne” is employed, however, only with reference to true Champagne.

The starting point for all sparkling wines is a still base wine (see “Sparkling Wine” box below). The grapes for the latter are harvested relatively early, before they are fully ripe, which due to their low sugar content leads, after fermentation, to a light wine with an alcohol content of 9–10 vol %.

For most sparkling wines one starts, not with a single wine, but instead with as many as 80 wines from different types of grapes and various vintages and locales, resulting in a cuvée or blend. The high art of mixing (assemblage) was cultivated especially by Dom Pérignon as a way of ensuring that a consistent high quality is maintained over the course of various years. In no sense should the mixing of different wines for the preparation of a sparkling wine be regarded as somehow disreputable; on the contrary, many of the best and most expensive Champagnes are derived from a masterly cuvée.

To the still base wine is next added a “tirage liquor” (liqueur de tirage), a mixture of yeast and sugar.

After transfer into a pressure vessel (a pressure tank or bottle), the second fermentation commences. The added sugar results, after fermentation, in an increase in alcohol content of ca. 1.5 vol %, and a build-up of pressure due to the carbon 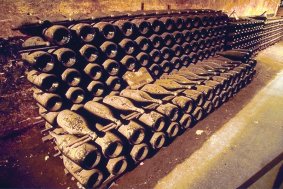 dioxide generated. Following this fermentation, and after a maturation period, the yeast residue is separated out.

Finally, a mixture (dosage) of sugar, “must” (grape juice), and wine is added for the purpose of adjusting the sweetness to a level established by the customer (see Tab. 1).

The base wine is transferred into huge pressure-resistant stainless steel containers (capacity 200,000 L or more), and yeast and sugar are added. During the ensuing fermentation and a subsequent maturation period of several months, the sparkling wine remains in contact with the yeast, and in the process its sensory characteristics improve considerably. After filtration of the yeast the wine is transferred into bottles.

► This process is the one employed by most wineries, since it makes possible the preparation of large quantities of good quality sparkling wines that are, at the same time, inexpensive.

This is the classical approach to preparing premium sparkling wines and Champagnes.

The second fermentation occurs in bottles sealed with a crown cap and lying flat on their sides so that the liquid makes good contact with the yeast lying on the bottom. At the end of the fermentation period the sparkling wine is left “standing on the yeast (lees)” for a months-long maturation. The decomposition of yeast residues occurring during this time brings about a distinct improvement in the aroma of the wine.

After the fermentation and a multi-month maturation, the yeast must be separated, not a simple operation with a bottle under pressure. The following cunning, tried and true procedure has stood the test of time:

The bottles are laid at an angle in a so-called riddling rack such that their necks are pointed slightly downward. The bottles are now frequently shaken in order that yeast lying on the bottom will be detached from the glass. At the same time, the bottles are rotated by one-eighth of a turn after each “riddling” and adjusted such that they become a bit more vertical.

After about 21 days, the bottles are finally fully vertical, and all the yeast has collected in the necks. In many wineries today this time-consuming manual operation has been assumed by a riddling machine, although certain renowned sparkling-wine cellars still employ specialists to do the job.

For removal of the yeast residues or lees, the neck of the bottle is submerged in a cold bath at –20 °C (–4 °F) until the liquid surrounding the yeast in the neck has frozen. The bottle is then opened briefly (disgorgement) so that the pressure inside will eject the ice plug, including all residual yeast.

Next the sweetness of the sparkling wine is adjusted through addition of a dosage mixture consisting of sugar, must (grape juice) and wine.

Finally the bottle is sealed with a cork, made from either natural cork or plastic, which is further secured with a wire cage.

► The highly labor-intensive process of bottle fermentation in traditional fashion (méthode traditionelle) causes production to be very expensive, and it is thus limited to superior-grade products. Only in the Champagne region of France may this traditional practice be designated as méthode champenoise.

► Sparkling wines prepared by this process may carry the designation “prepared by bottle fermentation.”

4. Sparkling Wine or Champagne — That is the Question!

Champagne is the undisputed king of all sparkling wines. According to strict rules of the “Appelation d’Origine Contrôlée” (which, by the way, in many European countries are strongly supported by law), the designation itself may only be applied to wines from the Champagne region of France, in the vicinity of Reims, and “Champagnes” must be prepared there according to a strictly prescribed method.

In order to assure the high quality of all Champagnes, every producer is required to observe a host of detailed production rules, as a result of which Champagne is probably the most tightly controlled drink there is.

The following is a small sample of the regulations: 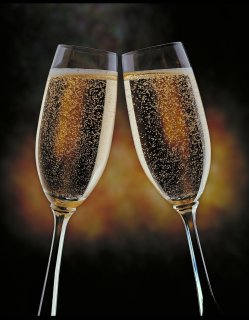 There are major differences in quality between the various Champagnes, which is in turn reflected in a price scale that is very open at the upper end.

5. But it Needn’t Always be Champagne

Superb products are also made outside the limits of the Champagne region, using identical processes. These must simply bear other names:

In the end it is not the label on the bottle that is decisive with respect to quality, but rather the tongue and nose of the consumer.

► Part 2 — Opening the bottle and choosing the glass