Opening a Sparkling-Wine Bottle, Then Choosing the Right Glass

Who would have guessed that both would give us such deep insights into thermodynamics?

When sparkling wines leave the wine cellar they are already mature, which is to say that prolonged storage will not improve their quality, because during storage the CO2 pressure must inevitably decrease. Nevertheless, bottles sealed with natural corks can safely be stored for 8 –10 years, and those with plastic corks for ca. 2 years, assuming they are kept at 10 – 15 °C (50 – 60 °F), and most definitely in the dark.

To properly open a bottle of champagne or sparkling wine, one is required to pay attention to only a few basic rules, and then apply common sense.

It is common to see the victor in a major athletic contest demonstrating the wrong way of carrying out virtually every aspect of this process. Shaking a lukewarm magnum of sparkling wine or champagne prior to opening it, in order to savor the shower that inevitably follows, has become an obligatory ritual, for example, at the conclusion of a championship football match. From a physical chemistry point of view, the phenomena involved are actually quite interesting. Vigorous shaking, for example, doesn’t increase the gas pressure in the bottle (ca. 7 – 8 atm) in the slightest, but it does cause countless tiny gas bubbles to form within the liquid. When a shaken bottle is opened, CO2 instantly passes into the gas phase over the entire surface area of these bubbles, guaranteeing a spectacular suds bath.

However, the perfect host opens a bottle of sparkling wine as follows:

Unprofessional handling has led to recorded cork velocities of up to 30 miles/h (50 km/h)! For this reason extreme caution is in order; flying champagne corks can be dangerous projectiles. For example, 17 % of the inpatient cases of severe eye injury at the University of Vienna Eye Clinic a few years ago were attributed to champagne corks [5]. A rather more bizarre accident occurred at the David Cross Gallery auction house in Bristol, UK, where a champagne cork once crashed through the canvas of a Victorian painting worth over €12,000 [6].

The starting point for a thermodynamic treatment of a sealed, cooled bottle of champagne appears straightforward enough: At an internal gas pressure of 5.6 atm and at 10 °C (50 °F), most of the carbon dioxide generated in the second fermentation step remains dissolved in the sparkling wine. The Henry–Dalton Law (2) describes the distribution of CO2 between the corresponding gas volume, ca. 15 mL, and the liquid phase. Thus, the law states that the solubility of a gas in a liquid is proportional to the external pressure of the gas:

At 10 °C and 5.6 atm, a cooled champagne bottle (V = 0.75 L) would contain ca. 9.5 g of dissolved carbon dioxide (Table 2) [3]. Once the bottle is opened the CO2 pressure falls to at most 1 atm. Solubility considerations dictate that at 10 °C no more than 1.7 g will remain dissolved, so roughly 8 g of CO2 must suddenly be set free. This quantity of CO2 corresponds to a gas volume of 4 L — more than five times the volume of the bottle.

Fortunately, this isn’t what actually occurs, since if it did, all the champagne would shoot out.

Let us proceed stepwise with our analysis. Consider first that only ca. 15 mL of carbon dioxide is gaseous initially: in the neck of the bottle, where it is at a temperature of 10 °C and a pressure of 5.5 atm.

To imagine unsealing of the bottle in a thermodynamically straightforward way, suppose the cork were able to slide its way upward through an infinitely long bottle neck. Our cork will be assumed to keep ascending in a frictionless way until the pressure inside the bottle reaches the external pressure of 1 atm. In this case, expanding carbon dioxide will accomplish pressure/volume work w = P1(V2 – V1) as it decreases from 5.5 atm to 1 atm against the external pressure P1, where V1 = 15 mL, the volume before expansion, and V2 equals the volume after expansion. For a heavy champagne bottle, we can assume with a clear conscience that the system is well insulated, so there will be virtually no heat exchange between the internal gas and the outside world. In such a process (described as an “adiabatic expansion”), the laws of thermodynamics require that:

where m = Cp/Cv, the quotient of molar heat capacities at constant pressure and constant volume (mCO2 = 1.30).

We make the further assumptions that carbon dioxide behaves like an ideal gas, and that the molar heat capacities Cp and Cv are temperature-independent.

With a pressure change from 5.5 to 1 atm, the CO2 expands, according to eq. (3), from V1 = 15 mL to V2 = 52 mL. Pressure/volume work exerted here (and acting on the environment) will be lost from the system, leading to a cooling of the CO2. Specifically:

Now, this result has been obtained with the aid of heavily idealized simplifications, giving a predicted cooling that is far too great. Our derivation assumed, for example, that CO2 is an ideal gas, and that we were dealing with a closed system. For a real champagne bottle, the actual amount of cooling would therefore be considerably less. Moreover, the motion of a real cork will certainly not be frictionless, instead it will involve a considerable amount of kinetic energy. Also, CO2 would be a solid at – 82 °C — very far removed from an “ideal gas”! The white fog or smoke so obvious when a real champagne bottle is opened does, however, show an associated cooling sufficient to condense or even freeze water from the surroundings (Fig. 1). 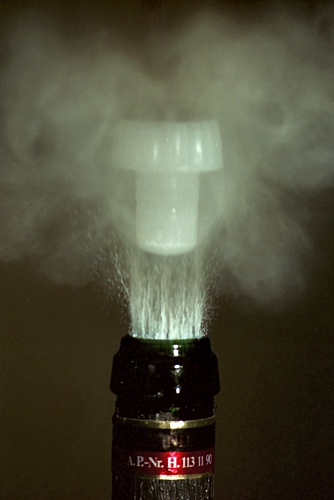 Once a champagne bottle has been opened, the considerate host inconspicuously sniffs the bottom of the cork to make sure it doesn’t betray any stale odor. Then the cold sparkling wine (6 – 8 °C, 43 – 47 °F) is poured — in two or three steps — into each glass, leaving them at most 2/3 full so ample room remains for the full aroma to develop. This raises a question as to the type of glass that would be optimal in terms of aroma development (Fig. 2). The goal, on one hand, is to make sure that the sparkling wine or champagne retains its freshness for as long as possible in the glass (i.e., that it does not quickly become warm or flat). But at the same time, we want our olfactory senses to capture the aroma as completely as possible.

Consider the merits, with respect to relative suitability, of two of the most common types of champagne glass: the “tulip” and the “coupe” or goblet. (A third possibility would be the conical “flute”.) 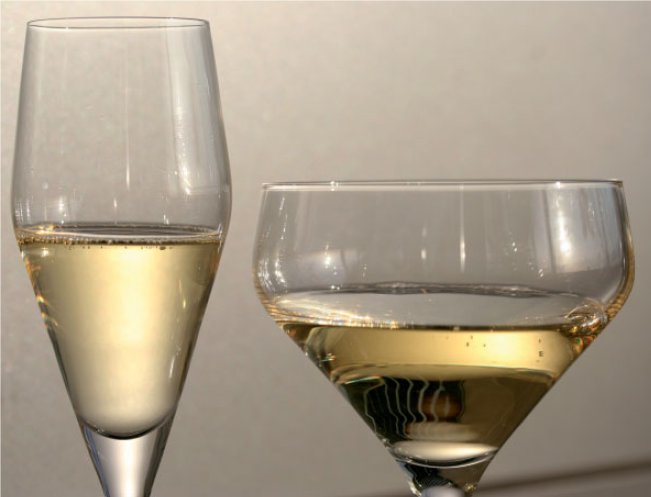 Figure 2. Tulip or goblet: with champagne, that is the question!

The shallow, bowl-shaped “coupe” has been closely associated with champagne for centuries due to its elegance. Legend even has it that its form was originally intended to emulate the “elegant” bosom of Marie-Antoinette, wife of King Louis XVI of France [7]. Such a champagne goblet has a surface area of ca. 60 cm2 (9.3 in2), and a serving depth of about 2.9 cm (1.14 in) (Fig. 2). By contrast, the tulip presents less surface area, only 20 cm2 (3.1 in2), but a fill level of 7.4 cm (2.9 in). So what effect does this have?

To begin with, a larger surface area facilitates the (for us invisible) direct escape of carbon dioxide into the atmosphere. The following equation expresses the net velocity, vT, of CO2 transport by way of an air/liquid interface:

where A represents the area of the air/liquid interface, δ = (csupersat./csat) is the supersaturation quotient, and kT is the characteristic mass transfer coefficient. Eq. (5) reveals that CO2 loss from a champagne goblet should be roughly three times that from a champagne tulip.

Measurements by Liger-Belair have shown [8] that CO2 loss is in fact greater from a champagne goblet than from a tulip, albeit by a factor in the range 1.6 – 2.5, not three.

Sensory considerations also argue in favor of the tulip. Because of the greater wine surface area in a goblet, aromatic components are able to pass more easily into the surrounding air, eluding detection by the nose. With the tulip, however, evaporating bouquet components collect inside the vessel, permitting champagne to be captured by both the tongue and the nose: simultaneously!

In other words, a champagne goblet may be ideally suited for serving shrimp cocktail or a dessert, perhaps even a sumptuously decorated cocktail of the alcoholic variety, but not for sparkling wine or champagne!

► Part 1 – Only Chemistry Can Be This Tingling