Beer brewed according to the German „Reinheitsgebot“ or purity law is regarded as the quintessence of an unadulterated food produced without any „chemistry“. What an error!

After having looked at the breathtaking α-ketol-rearrangement which converts hops into the so well appreciated bittering compounds in this last part, we look at the chemistry involved in the production of beer foam or “head”.

But first let’s have a look at the history of the Octoberfest.

On the 12th of October, 1810, Crown Prince Ludwig of Bavaria, who was later to become King Ludwig the First, married Therese of Sachsen–Hildburghausen, whereupon the groom treated his subjects to a special horse race and a public festival. Both food and drink were abundant, and the Munich “Schützengesellschaft”, which is roughly analogous to an American country club, but oriented around marksmanship rather than golfing, also staged a special shooting competition in honor of the royal couple. The guests, the hosts, the beer brewers – everyone was so enthusiastic about the event, that ever since that time, on Theresien Meadow in Munich, named of course for the Crown Princess on that long-ago occasion, despite the absence of royal sponsorship, what we know as the Munich Oktoberfest has been held annually!

At first, the “Agricultural Society in Bavaria” (“Landwirtschaftliche Verein in Bayern”) sponsored the accompanying horse races, and used the subsequent festival as an opportunity to present noteworthy rural accomplishments, rather like at a country fair in the United States. Starting as early as 1819, however, the city of Munich assumed overall responsibility for the annual Oktoberfest, though its timing has since been adjusted a bit so as to take advantage of the warm September evenings. Now only the final weekend actually falls in October.

In 2005, over six million visitors flocked to “the Wiesn” in search of “guad Essen und Dringa” (“good food and drink”) at the world’s largest public festival. Sharing 100,000 seats in the associated tents – 10,000 in the Hofbräu tent alone! – they managed to scoff down 95 oxen, almost 500,000 “Wiesn-Hendel” (Oktoberfest grilled chickens), and 180,000 pairs of pork sausages (Schweinswürstel). Given the consumption of over 6 million liters of beer, it should come as no surprise that a Wiesn highpoint for many of the visitors, especially those who had exceeded the legal drink–driving limit, was a sing-a-long involving such sophisticated songs as “Wahnsinn” (“Sheer madness”), “Hey Baby”, “Sha-la-la-la”, and “Anita”.

The ritual binge drinking is reportedly fairly rare today, so the record of the still famous pair of “Hager buddies” remains unbeatable: in 1901 this pair were granted “diplomas” at the Lang beer stall for downing 10 liters of beer each. Whether they were still able to remember their feat the following day apparently went unrecorded.

Things actually seem to go more smoothly nowadays. Still, at last year’s Oktoberfest, after drinking a couple of liters, some of the visitors managed to forget not only their worldly cares, but also 260 pairs of glasses, 200 cell phones, 45 children (!), one set of false teeth, a J. S. Bach musical score, a wedding ring, an arm from a shop-window mannequin, and a pair of crutches. The otherwise completely positive, overall folk festival atmosphere was only slightly dimmed by certain official Oktoberfest marshals, who – showing no sense of humor whatsoever – relieved visitors, as they passed through the exits, of more than 180,000 (!) festival beer steins, all of them, of course, taken along “quite accidentally”.

With an annual per capita beer consumption of 115 liters, Germany clearly classes as a land of beer drinkers, surpassed only by the Czechs and the Irish. Just under 1,300 German breweries turn out roughly 5,000 varieties of beer, totaling some 10.5 billion liters a year. About 14 % of this output is exported, in particular to Italy, Great Britain, and the United States (data from 2006).

11) The Culmination of the Festivities: A “Wiesn-Maß” (“Wiesn Beer Stein”)

The Munich Oktoberfest officially begins in mid-September with a cry of “O’zapft is” (“It’s been tapped!”), and until the first weekend of October there is a steady flow of fresh beer into a multitude of steins. The beer is kept from becoming too warm by a thick layer of foam, which also helps protect the various aromatic components present. The phenomenon of foam formation can be readily explained: beer kegs are filled under extra carbon dioxide pressure, and the sudden pressure release that accompanies tapping sets gas free, which in the form of tiny bubbles ascends to the surface. The same thing also happens, of course, with the opening of a bottle of carbonated water, cola, or Champagne. Still, beer foam is different somehow …

Why does only beer produce a stable foam?

Once again, as you might imagine, chemistry is responsible.

During the multistep process of creating beer, virtually all the proteins from the barley are decomposed, or at least denatured, and what remains precipitates: thanks to protein-decomposing enzymes, high temperatures during both kiln-drying and boiling of the wort, high sugar concentrations, and finally the action of “hungry” yeast cells, virtually nothing is left over.

Very few proteins are able to survive these harsh conditions, to eventually find their way – more or less severely damaged – into one’s beer stein. Fortunately, LTP1 (lipid transfer protein) numbers among the hardy few [18]. This particular protein (Fig. 10), the actual function of which in barley is still not precisely known, also suffers somewhat in the brewing process: its original three-dimensional structure is lost, and its amino acid chain is no longer complete. For our purposes, however, none of that matters. Indeed, quite the contrary. Only when damaged does LTP1 display the characteristics we are looking for, because as a very hydrophobic (or lipophilic) protein, rather like a fat, it now collects preferentially on surfaces; in the case of beer, this means especially on the inner surfaces of tiny, rising CO2 bubbles. 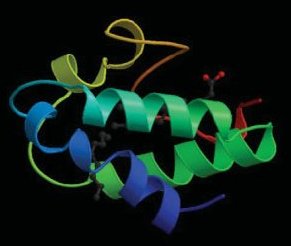 A protein layer thus occupies the interior walls of all the little bubbles in beer foam. It so happens, quite miraculously, that the bitter iso-α-acids 9, 10, and 11 (see The Oktoberfest Rearrangement: Part 2, Fig. 8), because of their nonpolar side chains, aren’t especially comfortable in water, and find themselves strongly attracted to other nonpolar compounds. 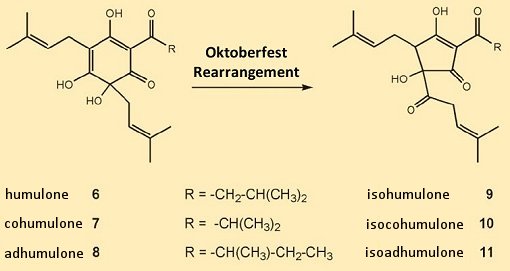 The LTP1 in foam fits the bill perfectly. A stable matrix of LTP1 and iso-α-acids forms. This matrix in turn coats and strengthens each of the bubbles [19].

The Consistency of the Foam

The stability and consistency of the head (foam) of a glass of beer is an important indicator of quality for the consumer. But unfortunately every head in every vessel will eventually collapse as a consequence of the force of gravity [20]. This fate arrives even faster if the beer is being drunk, because any motion at all will encourage some of the bubbles to burst.

The worst foam killer, however, is grease in any form. No wonder, because the lipophiles LTP1 and iso-α-acids, should they come in the vicinity of grease or fat, will immediately dissolve in it, and foam stabilization is at an end.

For that reason, fingerprints, lipstick, or food residues such as crumbs from potato chips (!) definitely have no place in contact with beer! Cleanliness is the First Commandment, therefore, not only in the brewing of beer, but also in drinking it.

Unlike with wine, beer glasses should never be refilled. Beer belongs always in a fresh, sparkling clean glass that is free of grease. In a well-managed restaurant, the connoisseur will be pleased to note that beer glasses are always washed with clear water and a brush. Dish detergent is taboo, because residues inside the glass inhibit proper foam development from the outset.

I wish to thank Prof. H.-U. Reissig of the Free University of Berlin, Germany, for technical support.

A closer look at the chemical role hops play in the beer-brewing process shows how beer owes its marvelous flavor to a great deal of chemistry.

As hops themselves actually are not bitter, and the wort tastes quite sweet, where does beer get its bitter taste from?

► See all articles by Klaus Roth published in ChemistryViews magazine