During a visit to Oktoberfest, you might perhaps offer a casual observation that Bavarian beer owes its marvelous flavor to a great deal of chemistry.

If so, to all intents and purposes, you might as well right then and there terminate your sojourn “auf der Wies’n”. The only thing that could possibly still save you would be a quick apology, and immediately buying a round for the band. Let’s say you don’t, though, and instead further add that Bavarian brewmasters carry out, using hops, an “α-ketol rearrangement”! Then you’re simply past rescuing. “Sso an’ Schmarr’n” (“What a bunch of rubbish!”): those are likely to be the last words you remember before you get to the medical tent.

To perhaps help with your vindication after the fact, let’s have a closer look at the chemical role hops plays in the beer-brewing process. So … “aufi geht’s und dann schau’n ma mal!” (“let’s get started, and then we’ll see!).

Wine and beer are man’s oldest alcoholic beverages [1, 2], where wine is derived from fruit, and beer from grain. In the preparation of wine, sugar from the fruit is transformed directly into alcohol with the aid of yeast [3], but preparing beer is more complicated as yeast is only able to process sugar, not starch. For this reason, the starch in kernels of grain must first be converted into sugar. Only then is it possible to carry out a fermentation with yeast.


Why do people go to all that trouble, when wine is actually the beverage of higher value?
The answer is simple: grain is easier to cultivate, is much less demanding with regard to soil and climate, and produces a higher yield per acre. Moreover, dried grain is easily stored, so that beer — in contrast to wine — can be prepared at any time during the year. These advantages taken together offset by a wide margin the disadvantages of a more complicated production process, and, generally speaking, beer is less expensive than wine.

Along the way from grain to a full stein of beer, one thing must never be forgotten: beer is a delicate drink; its preparation is a craft, an art, and at the same time a science in its own right, for which dedicated academic curricula even exist! In what follows, we single out for close examination, only a very few of the chemical aspects of the subject [4].

1) It all Begins With the Grain

Beer can be brewed starting from a wide variety of grain types, but the one best suited to the purpose is barley (Hordeum vulgare), especially two-rowed nodding spring barley (Fig. 1), with its low protein content. 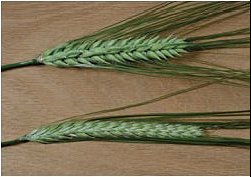 Barleycorns (or grains) consist of 60 % starch, furnished by the germ buds from the time they first begin to develop. From a chemical standpoint, starch is a polyglucose, which is to say many glucose molecules (1; Fig. 2) joined together. Barley starch consists of 20 % amylose (2) and 80 % amylopectin (3). Amylose, which is soluble in warm water (“soluble starch”), is familiar as the principal component of pudding powder. Amylopectin (“insoluble starch”), by contrast, does not dissolve, but merely swells in warm water, leading to a starch paste. In amylose 60–2000 glucose units are joined together in linear fashion, whereas amylopectin has branches at roughly every 15th glucose unit. Consisting of a total of 6000–40,000 glucose units, amylopectin molecules are far larger than those of amylose. In addition, barleycorns include ca. 10–15 % non-starch-like polysaccharides, in particular cellulose and its derivatives. These insoluble polysaccharides survive unchanged throughout the malting and mashing processes, and are ultimately filtered out. 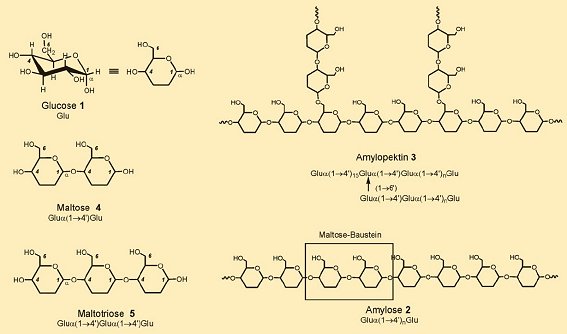 Figure 2. From glucose to starch and back.

2) From Germination to Green Malt

The goal of all processing steps prior to fermentation is the breakdown of the starches. In the first stage, barleycorns are moistened at 14–18 °C. When they have acquired a water content of 45 %, germination (sprouting) commences, at the onset of which growth hormones are released. These compounds in turn initiate the formation of enzymes: first those for degradation of cell walls and proteins that encapsulate starch deposits within the grains of barley, and then other enzymes for the degradation of starch.

Other grain crops, such as wheat, are unable to produce sufficient amounts of enzyme to cleave all of their starch into sugar. Thus, to brew wheat beer, for instance, one needs to start with a wheat/barley mixture. That way, enzymes from the barley will be available to decompose not only their own starch, but excess wheat starch as well.

After 6–8 days, sprouting (or germination) is terminated. Freshly germinated barleycorn smells like cucumber, and is referred to as green malt. Due to its high water content, green malt is easily perishable, and must be promptly dried (Fig. 3). 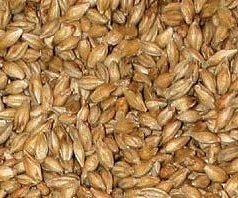 Figure 3. Malting barley after the onset of germination (green malt).

Although drying the green malt ensures that all sprouting will cease, it is important above all to ensure that starch-cleaving enzymes still retain their activity. For their protection, a pre-drying is first carried out — using air that is merely warm — down to a water content of 10–20 %. Only then, in kilning, is the temperature substantially raised: to 80 °C in the case of a pale malt, or perhaps 105 °C for darker types. As in the roasting of cocoa and coffee beans, complex reaction sequences occur at the kilning stage, for example, caramelization and the Maillard reaction [5–7].

The higher the kilning temperature, the darker the malt, and the less active the enzymes. Thus, caramel malts (150–180 °C) and specialty malts (>200 °C) are used in brewing only for improving full-bodied maltiness, and for intensifying the color in the case of a dark beer (Fig. 4).

The color intensity of a kilned malt is commonly expressed in EBC (European Brewery Convention) units. Pilsner beers are based on a light malt, dried at temperatures below 70 °C, whereas malt for dark beers entails kilning at a higher temperature, up to 105 °C:

4) Preparation of the “Filtrate”

Starch decomposition itself occurs during what is called “mashing”, the chemical subtlety of which becomes clear only upon closer inspection. In mashing, crushed malt is stirred into water and warmed.

For a good beer one needs to be using good brewing water. Acquisition and reprocessing of the water is a science in its own right. The soft water from the city of Pilsen in the Czech Republic is best suited to a light beer, with an accent of hops: beer that has in fact come to be called “pilsener”. On the other hand, water from Dortmund, Germany, with its high degree of carbonate alkalinity or hardness, lends itself especially to export-type beers. The water of Munich, characterized by non-carbonate hardness, is well adapted to the dark “Münchner” beer generally associated with that city.

When the moist, crushed malt reaches 50 °C, starch in the malted grain swells, and enzymes formed during the malting process (Fig.5) begin to carry out their assigned catalytic duties with the starch. 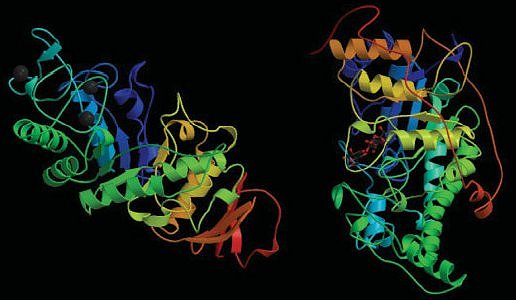 Figure 5. Important proteins for the brewing of beer: α-amylase (left) and β-amylase (right).

Starch, consisting of amylose (2) and amylopectin (3), is the primary glucose reservoir for plants. The two forms differ in the way their glucose modules are coupled. In amylose, pairs of glucose units (Glu) are joined exclusively through an oxygen atom between the C1 of one glucose unit and C4´ of the next. The hydroxy group at C1 is always axial (α). Thus, amylose is a strictly linear polyglucose made up of glucose units joined α(1→4´); i.e., Glu α(1→4´)nGlu. The chief component of the barley starch — 80 % — however, is amylopectin (3), in which α(1→4´) glucose chains are branched, at approximately every fifteenth glucose unit, through supplementary α(1→6´) links.

Amylase enzymes in the mash catalyze cleavage only of α(1→4´) bonds. Whereas α-amylase clips off — stepwise, from the chain ends — two glucose units at a time (thereby directly producing maltose 4, malt sugar), α-amylase snips fragments out from within amylose or amylopectin chains, fragments consisting of roughly six linked glucose units. As both amylases are restricted to cleaving α(1→4´) bonds, only amylose is subject to complete degradation to maltose [8]. Decomposition of amylopectin always stops in the vicinity of α(1→6´) branches. The corresponding amylopectin degradation products are referred to as “limit dextrins”. Cleavage of α(1→6´) bonds is then left to another enzyme, “limit dextrinase”. Linear fragments that remain after this enzyme does its job are once again subject to decomposition by α- and β-amylase.

The coordinated action of these three enzymes permits degradation, during the mashing process, of ca. 90 % of all the starch present. The principal products — glucose (1), maltose (4), and maltotriose (5) — are later fermented to alcohol (see Fig. 2). Roughly 25 % of the starch decomposition leads only to heavily branched limit dextrins (oligoglucoses, and α-dextrins), which yeast cannot ferment. These dextrins ultimately appear — chemically unchanged — in the final beer, helping to determine both its body and its caloric content.

Within the human body, dextrins are degraded completely to glucose with the aid of α-amylases, dextrinases, and maltases in saliva, as well as in the pancreas and the intestines.

Solid components of the mash (spent grain) are separated with a “lauter tun”, the filtrate from which, that is, “beer wort”, is subsequently brought to a boil in a brewing kettle [9, 10], which sterilizes the wort. Proteins, tannins, and inorganic salts precipitate out. During the course of boiling, certain desirable aromatic agents are also formed, and the color of the wort becomes more intense.

Were one to ferment this sweet beer wort directly, the result would be a “beer” with an unpleasant malty flavor and an intrusive alcohol character [11]. As a consequence, and indeed since antiquity, the flavor of beer has been modified by addition of various seasonings and herbs. Mankind has in fact been so creative over the centuries that we might almost inquire what has not already been tried as a beer additive [12]: from anise to cinnamon, from acorns to hemlock, from henbane to autumn crocus, as well as pulverized minerals, such as hematite and elemental sulfur, and various products of animal origin, including ambergris, bat blood, toads, and even insects (Spanish fly [13]). Over the years, of all of these, only one aromatic herb has prevailed: hops.

Part 2 and part 3 of The Oktoberfest Rearrangement
The chemical climax is the conversion of some hop constituents into bittering substances. In a single Munich Oktoberfest, about 10,000 kg of hops are converted via a breathtaking α-ketol-rearrangement into several 100 kg of these so well appreciated bittering compounds. This is just another proof that chemistry cannot only be exciting but can also taste good. Prost!