In Berlin around 1700, a lot of things were happening. Clever minds were being recruited from all over Europe and people streamed into the city. They were welcome. There were no questions about religion. They came to try their luck—and although alchemy was already past its prime, it reached the high point of its popularity.

Berlin, thus, developed a colorful inventor scene that led to the discovery of a century in 1706: Prussian blue. This discovery was the subject of many legends and stories. We will open the case one more time and solve it once and for all, thanks to new research into chemical history. In this part, we will look at the circumstances around the discovery and introduce some of the people involved.

1 The Alchemy and Chymistry Scene in Berlin

1.1 Kingdom of Prussia and Frederick I. 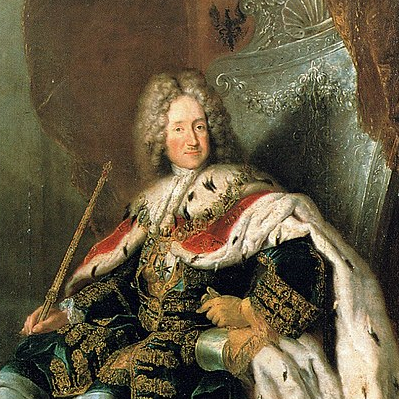 Frederick III (1657–1713) of the Hohenzollern family had ruled in Berlin since 1688 as the Elector of Brandenburg and Duke of Prussia. Colloquially, he was known as “Crooked Fritz” because he had a deformed spine. Deft political alliances and bribery allowed him to elevate Prussia to a kingdom in 1701 and to crown himself Frederick I. Berlin became the royal seat, and Frederick I started several magnificent building projects, including Charlottenburg Palace, the Arsenal, and the Berlin Palace.

Built on credit, this construction boom and the entertainment of the lavish court did spur crafts and trade, but it also drove up government debt. Frederick I tried to counteract this and resumed the clever policy—as used by his father—of recruiting well-educated artisans and creative minds from all of Europe. The immigrant population rose to 20 %. Some came from places like Switzerland and The Netherlands, but most were French Huguenots.

Many alchemists also moved to Berlin between 1700 and 1710, because alchemy was “in style”. The goal of alchemy was to convert base metals into gold or silver. The separation of chemistry from alchemy began as early as the 17th century and did not reach completion until the early 19th century. During this long transitional period, there were alchemists and chymists, sometimes even embodied in one person. One such man was Johann Friedrich Böttiger (1682–1719), who claimed to have produced gold while a captive of the Saxons and was involved in the development of porcelain [1].

Any self-respecting individual who could afford it carried out experiments in their own laboratory. Many an affluent man hoped to find the philosopher’s stone in order to turn base metals into gold and become even more affluent. It was no wonder that this attracted charlatans and swindlers, because blind greed made people of any standing easy prey. These black sheep contributed to the bad reputation of alchemists, although many of them carried out scientifically exemplary work, even by modern standards [2–5].

One example was Wolfgang II, Count of Hohenlohe (1546–1610) [6], who accurately recorded a failed experiment in his diary. He wanted to react one part gold with two parts silver and four parts mercury. However, nothing happened, only the mercury “sublimed” out of the mixture upon heating. The experimental protocol he recorded was exemplary!

Justus von Liebig (1803–1873) correctly and unambiguously noted, we should not equate alchemy with quackery:

“Alchemy has never been anything other than chemistry; its constant confusion with the gold making of the 16th and 17th centuries is the greatest injustice. The alchemists included a core of true natural scientists, who often deceived themselves in their theoretical opinions, while the vagrant gold cooks duped themselves and others. Alchemy was science, it included all branches of the technical and chemical trades. What Glauber, Böttger, and Kunckel achieved in this area can be equated with the greatest discoveries of our century.” [7]

Liebig was correct in his verdict of alchemy, though only Böttger was an alchemist, not Glauber and Kunkel.

2 In the Laboratory of the Well-Known Alchemist Konrad Dippel

To find out how the discovery of Prussian blue unfolded, we have to suppress our understanding of chemical and structural formulas for a moment, because we are in the year 1706, and Dalton’s atom hypothesis and the periodic system are still 100 and 150 years in the future, respectively. With this mental preparation, we can dive into the Berlin of the early Baroque and take a look into the laboratory of the well-known alchemist Konrad Dippel (see Infobox 1).

Dippel was a gifted alchemist and his reputation as a talented producer of gold preceded him. This came to the attention of count August of Sayn-Wittgenstein (1663–1735), Minister under King Frederick I, who summoned him to Berlin in 1704 and put a well-equipped laboratory at his disposal. Dippel quickly made a name for himself, not for making gold, but for producing animal oil.

This repugnant smelling Oleum animale was a long-established home remedy that was used in ointments against typhus and in a turpentine oil mixture to treat tapeworms. The desire for a universal medicine was not invented by alchemists: People in the advanced civilizations of India and China had been pursuing this for thousands of years.

The crude, black-brown animal oil (Oleum animale foetidum crudum) was obtained by the destructive distillation of horn, bones, and leather (see Fig. 1). Dippel improved the production method by using exclusively dried beef blood and developed a multi-step purification process based on distillations. However, the poor ventilation of the time must have meant that the laboratories stank horribly, which Dippel charmingly described in his last sentence, “the work is messy and arduous” [8] (see Infobox 2 and Fig. 2).

After many distillations of the crude animal oil, partially over potash (potassium carbonate, K2CO3) and burnt lime (calcium oxide, CaO), Dippel finally obtained a visually appealing, pale yellow oil (Oleum animale Dippelli). Nonetheless, the smell was still penetrating and critical contemporaries snidely described his oil as “stink medicine”. It became a major commercial success after Dippel’s bold assertion that it was an Elixir vitae and that regular ingestion would bring back spent vital force, cure every disease, and lead to eternal life.

Hartshorn was Dippel’s second big sales success. Hartshorn primarily consists of ammonium hydrogen carbonate (NH4HCO3) with some amounts of ammonium carbonate ((NH4)2CO3) and ammonium carbamate (H2NCO2NH4). The sharp ammonia odor of hartshorn increases pulse and respiration. Today, this effect is used by some athletes, particularly weightlifters and bodybuilders, for short-term performance enhancement. This type of effect has not yet been scientifically proven [9]. In the past, its purified form was mixed with fragrances and was extremely popular as a smelling salt because the sharp odor caused people to quickly regain consciousness after fainting.

Hartshorn was traditionally made from grated stag horn, hooves, and claws through dry heating. Dippel optimized the production process by heating a mixture of dried beef blood and potash until it glowed red (calcination). At these high temperatures, the volatile hartshorn (Sal volatile) sublimed out and was collected in a receiver. According to alchemical concepts, the black residue that remained had lost its “soul” and was known as Caput mortuum (dead skull). It was disposed of (see Fig. 1, bottom).

The production of animal oil and hartshorn gave Dippel a solid economic foundation. In addition, Dippel allowed guests to use his laboratory so they could carry out their own experiments and make their own products. One of these guests was a Berlin-based pigment merchant named Lieutenant Johann Jacob von Diesbach.

Johann Jacob von Diesbach descended from a noble Bernese family with many branches and arrived in Berlin in 1701. He traded dyes and pigments that he partially produced himself in Dippel’s laboratory, especially Florentine lake, a pigment made from the Mexican cochineal insects (see Fig. 3) [10]. The fertilized females of the cochineal insect (Dactylopius coccus) are dried and pulverized, and the pigment carminic acid is extracted with hot water [11,12].

As a paint merchant, Diesbach was not interested in (soluble) dyes like carminic acid, but in (insoluble) pigments, because only these could be mixed with oil or tempera to make paints. Laking was a reliable method for the conversion of many water-soluble natural dyes into pigments. Such laked pigments should not be confused with the similarly named coating material known as lacquer. In laking, first alum (aluminum potassium sulfate dodecahydrate, KAl(SO4)2•12H2O) and then potash solution were added to the dye solution. The pigment precipitated out of the solution together with white aluminum hydroxide (Al(OH)3). The precipitate was filtered out and used as a paint pigment in its dry form (see Fig. 4).

If his clients desired it, the shade of the Florentine lake could be changed within certain limits by the addition of metal salts, such as tin salts to make scarlet or iron salts to make it purple. The color intensity was determined by the ratio of adsorbed coloring to the white aluminum hydroxide carrier substance. The addition of hydrochloric acid could dissolve out some of the aluminum hydroxide, increasing the color intensity of the remaining solid.

One day in 1706, something went wrong for Diesbach. Instead of purple Florentine lake, he surprisingly obtained a deep blue paint pigment. Diesbach and Dippel must have found out what Diesbach had done wrong, because their error analysis allowed them to develop a stable production process for the new blue pigment. They did not breathe a word about the details.

This new blue pigment quickly became popular among the painters of Berlin, as demonstrated by a note in the Friedrichstadt Chronicle of 1706 [13]. It stated that a “Joh. Jacob Diesbach invented a certain blue paint… which is sold frequently under the name Prussian ultramarine or Berlin blue.” (see Fig. 5). This is the first use of the name Berlin blue, which is still used in German-speaking countries. In English, Prussian blue is the preferred term.

Artists were most excited about Prussian blue because they could avoid paying for the extremely expensive ultramarine. Ultramarine was obtained from ground lapis lazuli stones by an elaborate purification process. It is a sulfur-containing aluminum silicate with a composition of Na7Al6Si6O24S3. Ultramarine has been industrially produced since the middle of the 19th century. Demand for Prussian blue was accordingly high, and it was understandable that Dippel and Diesbach kept the secret of its production process. As the only producers, their economic future looked rosy.

In the following parts, we will delve into how Dippel’s aggressiveness almost made a mess of the whole business and who finally revealed the recipe.

Who leaked the secret recipe for Prussian blue?

How was Prussian blue really discovered—with luck or a stroke of genius?

Solving the case of the discovery of Prussian blue