From the 26th to the 30th of August the 4th EuCheMS Chemistry Congress took place in Prague, Czech Republic. Nearly 1,800 people participated in the program and attended a tremendous number of more than 500 scientific talks, two sessions with more than 1,000 posters, and several plenary lectures by well-known chemists.

Not only renowned scientists were guests, also a lot of young chemists from different countries gave talks or presented their work as posters. 569 young chemists from all around world attended the congress, while 246 of them were young chemists from Germany. Nearly 200 were funded by travel grants from the Gesellschaft Deutscher Chemiker (GDCh, German Chemical Society), as well as its dependent foundations, the Karl Ziegler Foundation and the August Wilhelm von Hofmann Foundation.

The European Young Chemists Network (EYCN) hosted several sessions, one of them specially organized by the Young Chemists Forum (JCF) of the GDCh, with a talk given by Professor Klaus Roth from Berlin, Germany, about “Beer – from the first glass to a hangover”. 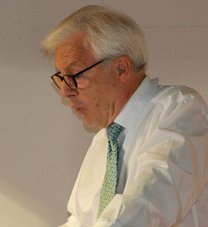 Professor Klaus Roth (pictured right) addresses members of the Young Chemists Forum of the GDCh at the EuCheMS Congress in Prague.

The GDCh also arranged a special “science-speed-date” together with several companies for young chemists to get information about career possibilities. This was a great opportunity for the young scientists to get in touch with several firms offering job prospects. Members of the Employer Branding of different companies also gave important hints for applications and job interviews.

The events organized by the GDCh and the JCF were extremely successful and also well attended by the older participants of the EuCheMS Congress, so that the rooms, where these sessions were held, were sometimes very packed (pictured).

It has to be mentioned that the plenary lectures in the big Congress Hall with more than 2,700 seats could have seen more visitors, because a lot of seats remained empty. Maybe the organizers can give students of the hosting city the possibility to attend these lectures for free next time. We think this is worthy not only for the students but also as respect for the presenting authors.

Nevertheless, the congress was a great event not only for young chemists. Alongside the scientific program, different social events and conversations facilitated strong networking between the participants. Although the organization of the program and the scientific side took a lot of time, it was nice to get connected to a lot of younger and older chemists from all around the world and to strengthen contacts with companies. Also the traditional food of the Czech Republic could be tried in the tasty conference dinner or at restaurants in the evenings. Some rumors say that a lot of Czech beer also found willing consumers …

The 5th EuCheMS Chemistry Congress will take place in Istanbul, Turkey, in August 2014. We look forward to an equally successful event.