Asparagus is highly prized in culinary circles. However, enjoying asparagus has an unpleasant side-effect that sets it apart from other vegetables, but is seldom talked about: It makes urine stink. This time, we’ll look at whether everybody’s urine smells after eating asparagus.

7. About Stinkers and Sniffers

Does every person produce foul-smelling substances and release them in their urine after eating asparagus? It was long assumed that this was the case, though individual cases did raise some doubt. There are two possible explanations: Either these people cannot produce the odorous substances in asparagus urine, or they cannot detect the odor. It is also possible for both to be true at once.

In an initial experiment in 1987, Stephen Mitchell and his co-workers carried out a broad study to first find out if there really are both asparagus urine producers and nonproducers, and if so, whether this trait is inherited [7,26]. Once a month for one year, 800 volunteers (562 men and 238 women) were required to eat 250 to 300 g of asparagus first thing in the morning (!) after emptying their bladders. The urine produced in the four hours following this unusual breakfast was collected and compared with a urine sample collected before the asparagus breakfast. In addition to the these 800 volunteers, an additional 102 people from 13 families were included in the study in order to uncover possible genetic correlations.

A total of 902 people participated in the study, providing two urine samples twelve times over the course of a year. The study included 21,648 (!) urine samples whose scent was evaluated by only three (!) selected individuals who previously demonstrated that they could identify low concentrations of methanethiol (3) and dimethyl sulfide (4) in urine samples. What a heroic undertaking!

A second impressive figure: If 902 people eat 12 portions of 0.3 kg, a total of 3.25 tons of asparagus find their way into a stomach. At a price of about 10 euros per kilogram of asparagus, one could say that 32,470 euros ended up as urine on the lab benches of Mitchell’s co-workers.

Of the participants, 43 % produced asparagus urine, just short of half. The family study revealed that the children of one producer and one nonproducer can be either producers or nonproducers, independent of gender. The children of two nonproducers were always nonproducers. The ability to produce asparagus urine is, thus, an autosomal dominant inherited trait. Dominant traits always present if at least one parent passes down the gene for the trait, and autosomal traits are inherited independent of gender and are, therefore, not located on the gender-specific chromosome 23.

Extremely sensitive people should take this into account when choosing a partner, perhaps by eating an asparagus dish on their first date and discussing the relevant genetic questions. 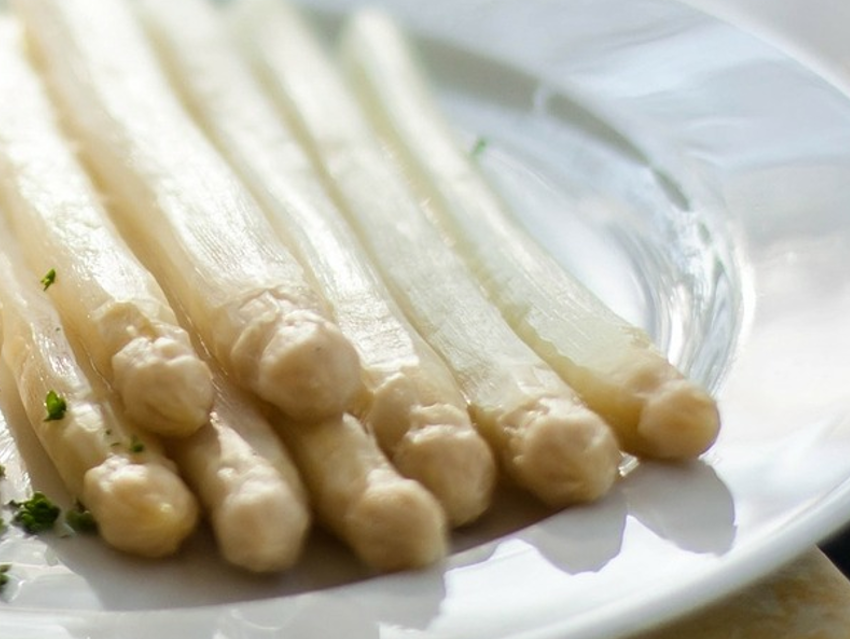 A few years ago, a research group at Monell Chemical Senses Center in Philadelphia, USA, investigated the second possible explanation: namely, that not all people can detect the typical odor of asparagus urine [8, 27]. DNA analyses were used in an attempt to genetically assign the production and detection of typical asparagus urine odor. A group of 38 volunteers, who were found to have a good general sense of smell, were selected. Having been informed about the details of the experimental protocol, they all agreed to participate in the following study setup:

The 38 participants were then asked to evaluate the odor of their four personal urine samples, as well as that of 148 urine samples from others. Several participants were unable to continue the study at this point because of an “unexpected aversion” to the smell of urine. Among the remaining participants, it was determined that about 8 % did not produce the typical odor of asparagus urine, but could smell it in the urine of others. 6 % of the participants could not smell the asparagus urine odor, though they did produce it themselves. There is, therefore, no relationship between the two abilities (production and detection).

Genetic fingerprints were used to trace the ability or inability to detect the odor of asparagus urine to chromosome 1, where a cluster of 50 genes that code for smell receptors is localized. There appears to be another related gene near the OR2M7 gene (OR = olfactory receptor), which codes for the receptor that detects geraniol and lemon. This second gene seems to be responsible for producing the receptor for the detection of asparagus urine smell. The researchers were not able to draw any further conclusions.

Although asparagus has been on our menu for two millennia, this regal vegetable still holds many secrets. Most notably, we are still in the dark about production of the stringent odor of the urine. Eating asparagus shows us the limits of our knowledge while also imparting a second lesson: The naïve and sweeping belief that all humans have an identical metabolism—producing the same odorous substances and sensing an identical smell—is false.

One aspect of our consideration of the odor of asparagus urine has remained fully unaddressed, scientifically: its quality. Olfactory verdicts remain overwhelmingly negative (Benjamin Franklin, [28]) or indifferent (boiling cabbage soup), but some consider it a captivating fragrance.

In his seven-volume novel “In Search of Lost Time”, Marcel Proust (1871–1922) rhapsodizes [29]: “But what delighted me were the asparagus, steeped in ultramarine and pink, whose tips, delicately painted in little strokes of mauve and azure, shade off imperceptibly down to their feet—still soiled though they are from the dirt of their garden bed—with an iridescence that is not of this earth. It seemed to me that these celestial hues revealed the delicious creatures who had merrily metamorphosed themselves into vegetables and who, through the disguise of their firm, edible flesh, disclosed in these early tints of dawn, in these beginnings of rainbows, in this extinction of blue evenings, the precious essence that I recognized again when, all night long following a dinner at which I had eaten them, they played, in farces as crude and poetic as a play by Shakespeare, at changing my chamber pot into a jar of perfume.”

In his novel “Love in the Time of Cholera”, the Literature Nobel Laureate Gabriel García Márquez described an odd quirk in one of his primary characters, Dr. Juvenal Urbino: “Even when it was not the season for asparagus, it had to be found regardless of cost so that he could take pleasure in the vapors of his own fragrant urine.”

The puzzle surrounding asparagus urine seems to be more complex than it seemed at first. Clearly, there are people who can smell it and those who cannot, people who produce the odor and those who do not, and people who are disgusted and those who are enthusiastic. Even the two authors of this article do not agree on the qualities of this odor: For S. S., asparagus urine smells repulsive, pungent, and disgusting; for K. R. it is sweet, aromatic, and pleasant. It is clear that much lies in the nose of the sniffer.

The authors wish to thank Dr. G. Penzlin, Bonn, Germany, for his help in solving tricky problems with nomenclature.

[28] B. Franklin, Letter to the Royal Academy of Brussels, in The Bagatelles from Passy, Eakins Press, New York, 1967.

The Smell of Asparagus Urine – Part 1

What substances cause the characteristic smell of asparagus pee?

The Smell of Asparagus Urine – Part 2

Why does asparagus produce odorous compounds?

The Smell of Asparagus Urine – Part 3

How does asparus change when it is cooked?

The Smell of Asparagus Urine – Part 4