Transformation of ripe ears of grain into a fragrant, aromatic bread borders on the miraculous. It is an accomplishment achievable only with the help of many hands: from those of the people responsible for the grain hybrids, through the farmer, to the miller, and finally the baker. Behind such “miracles” often lies a hefty amount of chemistry, traces of which in this case we can readily detect: for example, when—through kneading—a sticky mass is transformed into a smooth bread dough.

And in the baking process? It of course entails chemistry at its purest, visible as we watch a “simple” dough rise, and soon thereafter detect a truly seductive fragrance beginning to issue from the oven. A bit later we relish subtle, welcome sounds as we bite into a fresh, crisp crust, at the same time sensing with our tongues the delightful soft center of the loaf, able finally to enjoy the heavenly flavor of this freshly-baked “miracle”.

Surely it would be worthwhile for us here to have a closer look at this remarkable process of preparing a loaf of bread!

Mankind’s deliberate cultivation of wild grasses began as early as the Neolithic period, starting around 10,500 B.C. Recent studies have shown such cultivation did not commence as one sudden discovery, but amounted rather to a protracted process extending over millennia [1], during which our modern, fertile wheat was gradually developed, starting from the humble wild grasses emmer and einkorn [2]. With a worldwide annual harvest of ca. 651 million tons, about 20 % of mankind’s calorie requirements are currently (2010) being met by wheat, more than with any other crop. Thanks to effective breeding, and introduction in the late 19th century of machinery in the field, mill, and bakery, wheat flour and the bread baked from it are foodstuffs that today are both extremely valuable and at the same time remarkably inexpensive.

Introduction of industrial mass-production methods in bread factories in the 1980s threatened to force upon us a disappointing monotony in both the types of bread available and their flavor. It would appear that this phase may be passing, however, with a recognition once again of the value of variety, evident in both new creations and the rediscovery of many long cherished bread forms.

A host of regional bread specialties has long marked the German-speaking realm as a sort of bread paradise, one truly unique in the world. Let us therefore pursue creation of a loaf of German bread, from rye and wheat field all the way to the table, taking time as we go to note perhaps with some surprise the numerous chemical processes that unfold before us.

Cereals are crops derived from the family of the grasses, distinguished especially by their large seed kernels. Since most bread is derived exclusively from wheat and/or rye, these two are often referred to as the bread grains, with rice, maize, millet, oats, and barley relegated to the category of non-bread grains. This distinction oversimplifies the situation, however, since most of the latter do find their way into certain less common, or specialty, breads at least somewhere in the world.

In the case of wheat, bread and other baked goods rely almost exclusively on soft wheat (Triticum aestivum). In Germany, farmers plant mainly winter wheat. The actual variety of available wheats would be almost unimaginable for the average layman; each year the farmer is faced with selecting an appropriate variety, taking into account especially climate factors, soil conditions, resistance with regard to likely pests, and the current economic situation.

Rye belongs to the genus Secale. It produces long, bearded ears (Fig. 1), and is less demanding than wheat with respect to climate and soil quality, for which reason it is the preferred crop in northern Germany, Poland, Russia, and Scandinavia. Nevertheless, taking Germany as a whole, wheat remains dominant: in 2012, 22.4 million tons of soft wheat were harvested there, compared with only 3.8 million tons of rye. 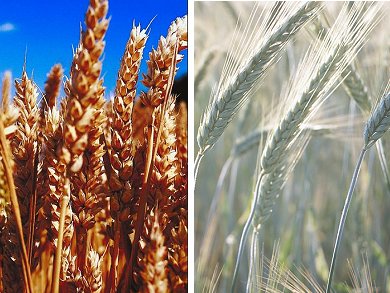 Figure 1. Wheat (left) and rye (right), ripe for the harvest.

2. A Kernel of Wheat

A kernel of wheat is a complex entity, not only in its anatomical structure (Fig. 2, Tab. 1), but also chemically. The various components—such as fats, proteins, carbohydrates, minerals, vitamins, and indigestible fiber—are distributed in a very heterogeneous way. Wheat germ provides ca. 25 % of the total protein content, and a relatively high proportion of the fat, even though it represents only 2–3 % of the kernel’s overall weight. The bran, meanwhile, is especially rich in minerals and indigestible fiber, and in the endosperm (90 % by weight) is found nearly all of the starches, but only small amounts of protein (gluten) and minerals [5].

3. Milling and the Mill

The mechanical grinding of kernels of grain is a difficult and laborious process. Even after introduction by the Romans of the grist mill, fine white flour remained for centuries a luxury reserved for the affluent. Only after invention around 1800 of the roller mill, in which kernels are pulverized between steel rollers, did it become possible to produce an inexpensive white flour.

It is necessary prior to milling to remove various potential contaminants from grain as delivered to the mill: gravel or stones, insect residues, seeds from other plants, ergot, bits of metal, twigs, etc. Initial cleaning involves separation on the basis of particle size and form (grading). Stone separators function specifically to remove heavy particles, like stones or metal fragments. In a modern industrial mill, every—literally every!—kernel of grain is then examined with an optical sorting device, based on digital camera technology, in a search for possible color deviations. Specific particles with a color deemed inappropriate are detected and ejected selectively from the grain stream using blasts of air—directed very precisely and typically operating at a pressure of 4 atm.

Throughput with a modern optical grain sorter can be breathtaking: in a single second more than 30,000 (!!) kernels of grain will be examined visually and automatically appraised. This high throughput is achieved with a camera simultaneously capturing images of falling kernels in each of perhaps 72 shafts. Through parallel operation with multiple cameras the overall throughput can be increased to over 150,000 kernels per second. Such effort is warranted especially in the case of rye because of the latter’s susceptibility to ergot (See: A Chemical Examination of the Isenheim Altar: Role Played in History by Horned Rye). The farmer can to some extent minimize the ergot risk through careful selection of seeds, yet it remains the weather that ultimately determines the growth potential of the fungus.

The presence of ergot in rye is signaled by its considerably darker color (Fig. 3, right). Fortunately it is thus readily detectable with an efficient optical grain sorter. This is important: because of its serious toxicity the concentration of ergot in bread grain is not allowed to exceed 0.05 %. Ergot is the overwintering form (mycelium, sclerotium) of the sac fungus Claviceps purpurea, which falls to the ground in autumn, spends the winter there, and in springtime becomes the source of fungal spores which are carried by the wind to grain blossoms. There they become embedded, prevent fructification, and again form dark scerotia that can be up to 1.5 cm long (Fig. 3, middle).

The sclerotia contain a veritable alkaloid cocktail, the principal component of which is ergotamine, a derivative of lysergic acid. Ergotamine is highly toxic, producing cramp-like symptoms and/or excruciating pain in the limbs. In the Middle Ages, this condition frequently took on epidemic character, coming to be known as “St. Anthony’s fire” (later, after it was better understood, called simply “ergotism”). More on this can be found in A Chemical Examination of the Isenheim Altar: Role Played in History by Horned Rye

The alkaloids of ergot are not the only toxic metabolic products due to fungi that may contaminate grain. At high temperature and humidity, grain is also susceptible during the flowering period to various molds, especially fusaria; in the case of wheat, primarily Fusarium graminearum. Thus, in 1998 over 90 % of the wheat crop in central and northern Germany was found to be infested with fusaria. The fusaria toxins DON (desoxynivalenol, also called vomitoxin) and ZEA (zearalenon) may affect the immune system, and can act as allergens. ZEA also shows estrogenic and anabolic effects, and in grain products these substances, too, are not allowed to exceed certain prescribed levels [6]. In both cases they appear, however, to be less problematic with humans than farm animals.

Grinding of the grain is a multistep mechanical process, with repeated alternation between milling and sieving. Traditional millstones are today found turning only in nostalgic mills operated mainly for the benefit of tourists. In a modern commercial mill, the grist will instead be captured between pairs of steel rollers rotating in opposing directions, where the surface structure of the rollers—typically ripple rollers for coarse milling, smooth rollers for a fine product—and their separation can be adapted to the particular grist at hand.

After each of roughly 8–12 successive grinding operations, the grist is separated into its various constituents as a function of density and grain size. The requisite screening proceeds with the aid of huge, electrically driven sifters, in each of which a set of large sieves of differing mesh (100–1000 μm), arranged as a vertical array, effectively sorts the freshly ground material into flour, coarse flour, semolina, and coarse hull residues (Fig. 4). The end result, after many passes, represents the entire range of typically available commercial flour types (Tab. 2). 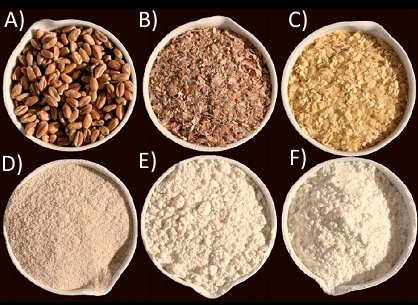 Figure 4. Raw input (above) together with typical products (below) from a mill. Wheat kernels, after cleaning (A), are pulverized through several stages of grinding (milling). The first stage entails separating out the hulls (bran) (B) and the germ (C). The residual endosperm, with bits of hull still attached, is repeatedly ground further, adhering hull material being separated out at every stage (D, E), until what is ultimately obtained is a fine, white flour (F).

Table 2. Types of flour are sometimes defined on the basis of mineral content, as established by ashing. Since the minerals are derived largely from layers of hull, reported mineral content reflects the level of residual hull material. Also, the lower the hull content, the lighter the shade of the flour.

Freshly ground flour, because of its natural content of pigments (xanthophylls), has a faintly yellow tinge. Storage allows this colored matter gradually to be oxidized by oxygen in the air, such that the flour becomes noticeably lighter over time. Apart from this optical change, the “ripening” of flour also permits free SH-groups in some of the proteins to oxidize to disulfide bridges, resulting in cross-linkage.

This in turn improves baking characteristics of the flour.

Looks at the chemical reactions underlaying the kneading of the dough.

Looks at the chemical reactions during the baking of the bread and the skills trained and experienced bakers need.

See all articles published by Klaus Roth in ChemViews Magazine