“The only criterion was excellence”

The 3rd EuCheMS Conference is an ideal platform for spotlighting chemistry as the key source of sustainable solutions to the mega-topics and challenges facing all of us today: energy, food supplies, and resources in a healthy environment.

Nachrichten aus der Chemie talked with Francois Diederich and Andreas Hirsch, co-chairs of the Scientific Committee and ChemViews brings you the highlights of the interview.

Nachrichten aus der Chemie: All good things come in threes. From August 29 to September 2, 2010 the 3rd EuCheMS conference will take place in Nuremberg. What differences can we expect from the conferences in Budapest and Turin? 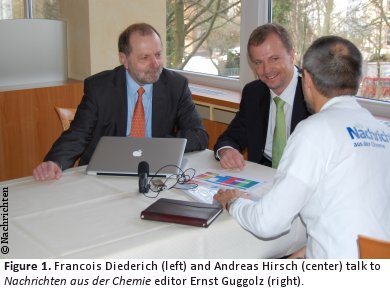 Francois Diederich: We have kept some of the structures that were working so well as our “trademark”, as it were – just as the ACS meetings do. They keep the same format for years. The positive resonance of Budapest 2006 and Turin 2008 certainly made recruiting top conveners and guest lecturers easier this time around. We have also preserved the vertical thematic structuring that made the two previous meetings so successful.

Andreas Hirsch: Seven main topics lend a basic structure to the event. They are each introduced by eminent plenary speakers. But at the Nuremberg congress, the panel of plenary speakers is different from that of Turin: though thoroughly international, Europe is the showcase of the plenary lecturers here.

Nachrichten: We understand that each main topic will be discussed in various sub-symposia.

Diederich: That’s right. Each of the seven main themes will be discussed at three or four symposia, each featuring some six guest speakers from Europe and elsewhere, plus shorter talks and poster presentations. The symposia are organized by leading conveners who have attracted high-level guest speakers from all over Europe. The only criterion for the selection of lecturers was excellence. The symposia are an ideal format for presenting and debating the basic scientific developments needed to cope with the mega-themes of the future.

Hirsch: In addition to the core program, a number of special symposia will be organized by EuCheMS divisions on Life Sciences, Inorganic Chemistry, Chemical Education at Work, Organic Chemistry, Party on Physical Chemistry, and two satellite meetings at the University of Erlangen-Nuremberg.

Nachrichten: If I’m counting correctly, more awards will be presented here than ever before. Is that right?

Diederich: That’s right. To name some, there is the August-Wilhelm von Hoffmann-Denkmünze of the GDCh, the European Young Chemist Award from EuCheMS, the Heinrich Emanuel Merck award for Analytical Sciences, the Reaxys PhD Prize, the Young Chemist Award and, for the first time, the First European Sustainable Chemistry Award, sponsored by SusChem, the European Environment Agency, and Cefic.

Nachrichten: Why was Nuremberg chosen as the site of the third EuCheMS conference?

Hirsch: Nuremberg has an excellent modern congress centre and a fine infrastructure – all at a reasonable prices. There are the many cultural offerings, too. Medieval Nuremberg with the Kaiser’s Castle is very attractive, very interesting, and historically significant.

Nachrichten: What is specifically “European” about EuCheMS conferences?

Hirsch: A top-level scientific event in a historical medieval setting is possible only in Europe. Both speakers and audiences reflect not only the great diversity among scientific communities but also the cultures of the various European countries. Different countries have different strengths in chemistry, too. Assembling them all in a single showcase allows an outstanding overview of European science. This kind of up-to-date picture of the European research landscape gives a big boost to the creation of a European ¬research sphere. For example, supramolecular chemistry is one highlight and a strength of European research, so this theme is expected to have particular weight in the conference program.

Nachrichten: What is the impact of EuCheMS compared with other international conferences?

Diederich: European Chemistry needs a regularly scheduled European Meeting. It is just like sports. It is nice to have national conventions but the really exciting events involve all of Europe and higher levels of competition – just like in the Football Champions League. The higher quality of European chemistry journals demonstrates the benefits of changing from national-only to European.

Nachrichten: So you hope that the EuCheMS Conferences will also play this role?

Diederich: Absolutely. As we move from national to more competitive, higher-level European meetings, the visibility and impact of European chemical sciences will grow far beyond Europe. Such meetings will ultimately attract eminent scientists from the other major players in chemistry such as the USA, Japan, India, and China. Particularly strong attendance by industrial and young scientists, besides being fertile ground for scientific discussion, is one of the impact factors that mark a conference’s quality and success. We certainly expect to have a high impact. The Asian scientific communities realize this, too, and they are putting a lot of work and resources into holding Asian congresses.

Nachrichten: The 4th EuCheMS conference will be in Prague, only 250 km away from Nuremberg: is Eastern Europe a favored focus? 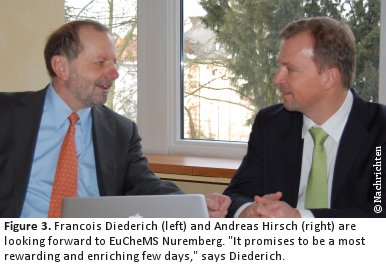 Hirsch: Nuremberg’s position at the interface between the early EU countries and the new Eastern European EU countries is important. Chemists from Poland, Czechia, Slovakia, Slovenia and Hungary can easily come by car, which is convenient and economical. We hope for a large participation from Eastern Europe and have tailored parts of the program specifically for this audience. I am certain that there is much untapped chemical talent in the Eastern European countries. We hope many Eastern Europeans will attend and show us in their presentations what they have done and can do. As an example, organic chemists in Eastern European countries focus in their research on heterocyclic chemistry, which is essential for drug development. Theoretical chemistry is prominently represented, too. So these topics are highlighted in the program. We hope to make a smooth transition to Prague 2012.

Nachrichten: What do you personally expect from EuCheMS Nuremberg?

Diederich: We are very excited about both the setting of the congress and its scientific program. It promises to be a most rewarding and enriching few days and to make a unique contribution to establishing the EuCheMS Congress as the leading bi-annual event of European chemistry. See you in Nuremberg!

More ChemViews articles about the EuCheMS

Editor’s note: In addition to the conference program and events discussed here, ChemViews will be giving presentations at the internet café over the course of the conference.