With around 2,500 attendees, the EuCheMS conference is the biggest European chemistry event and continues to build on the successes of the previous two congresses. This year, there were 7 Plenary lectures, around 180 invited talks, 370 oral presentations and more than 1,400 posters on display. Companies displayed their products in a bustling exhibitors hall and presented new services, approaches to research and results, there and in seminars.

The conference opened with addresses from EuCheMS past-president, Giovanni Natile, Italy, European Parliament member, Angelika Niebler, Germany, and the Mayor of Nuremberg, Horst Förther, along with a video address from the current EuCheMS president, Luis Oro, Spain. Each welcomed the attendees to Nuremberg and expressed their belief in the quality of science to be presented over the next few days and emphasized the important role science, and chemistry in particular, play in today’s society. 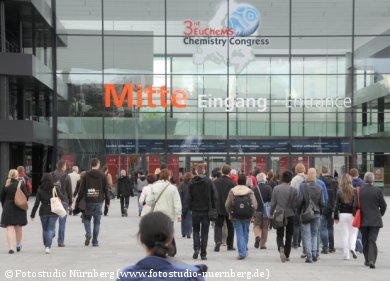 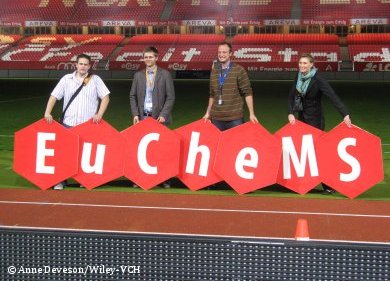 In recognition for his work in the field of sustainable chemistry, Mattais Beller, Rostock University, Germany, was awarded the European Sustainability Award.

The scientific program began with Barbara Imperiali, MIT, USA, presenting her recent work on the development of fluorescent tools in chemical biology. After which, there was a brief musical interlude while the brass quintet of the Nuremberg State Theatre played. Before Klaus Müllen, Max Planck Institute, Mainz, Germany, took the podium to deliver his fascinating talk on materials synthesis with emphasis on macromolecules such as shape-persistent dendrimers and surface functionalized protein globules, the August-Wilhelm-von-Hofmann-Denkmünze was presented to C. N. R. Rao, Bangalore, India.

At the conclusion of the evening, there was a welcome reception and buffet which allowed chemists to mingle, relax and chat about the day’s events.

Each day began with a Plenary lecture before splitting into smaller talks. The topics for the plenary lectures ranged from dye sensitized solar cells, given by Michael Grätzel, Ecole Polytechnique de Lausanne, Switzerland, to a talk entitled “Aromaticity switching in porphyrinoids and heteroporphyrinoids” in which Lechosław Latos-Grazynski, Wrocław University, Poland, described 6 electron versus 18 electron aromaticity and how to switch between them using redox chemistry. He also presented some porphyrin –bases systems with twists, in which a switch between Hückel and Möbius aromaticity could be induced by heat, solvent or acidification.

People taking a break took full advantage of the internet café at the Wiley-VCH stand. Presentations about ChemistryViews were given by the editors and the film: That’s ChemistryViews.org.

The red congress bags were a common sight here and proved to be popular and easy to spot in Nuremberg as well, making navigation to the conference center easy. 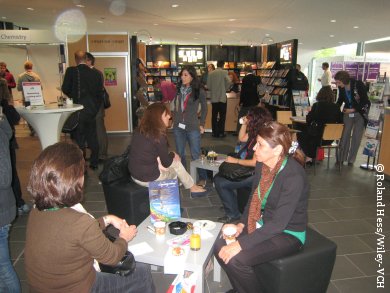 Wednesday evening was unforgettable with the social highlight of the conference, the Congress party at the easyCredit-Stadion, where people got to show off their football skills or just relax and watch the stunning fireworks display. 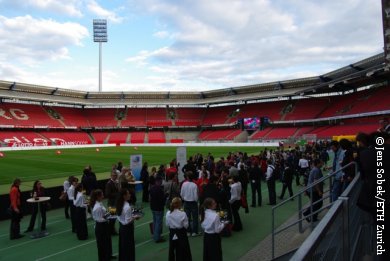 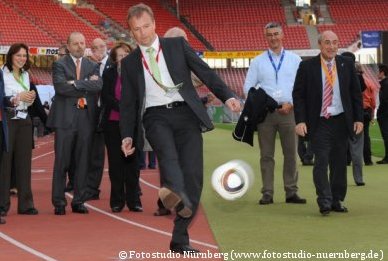 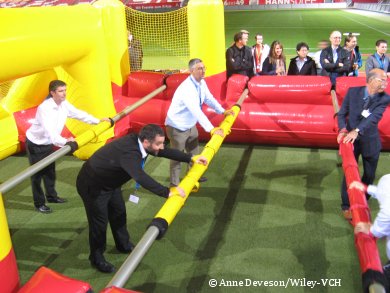 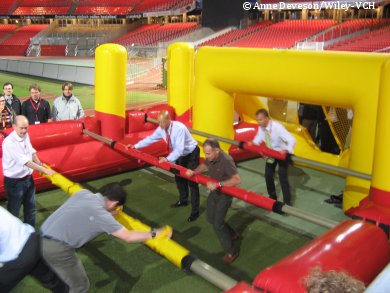 More ChemViews articles about the EuCheMS

EuCheMS (European Association for Chemical and Molecular Sciences) is a non-profit-making organisation, founded in 1970. Its object is to promote co-operation in Europe between non-profit-making scientific and technical societies in the field of chemistry and molecular sciences.

The organisation can draw upon significant resources, having 47 member societies which in total represent some 150,000 individual chemists in academia, industry and government in over 35 countries across Europe.

EuCheMS is an Associated Organisation of IUPAC.