After covering saccharin, the poisonous lead(II) acetate, cyclamate, aspartame, acesulfame-K, and thaumatin, we have a look at sucralose, a chlorinated natural sugar that the human body cannot use as an energy source.

Sucrose (once known as saccharose) was and remains the measure of everything when it comes to sweeteners. Since Emil Fischer (1852–1919) first elucidated the structure of glucose, countless research groups throughout the world have worked in the field of sugar chemistry, and in the process always kept their eye on the issue of sweetness. But after a hundred years of effort, no chemical tricks have succeeded in increasing the sweetening power of sucrose through minor structural changes, while maintaining its pleasurable taste. To the contrary, many of the sucrose derivatives examined display a decidedly bitter taste (see Fig. 24).

Even the slightest change to the molecular structure, such as introduction of a methyl group at the 4 position (above), changing the configuration at C-4 (to give “galacto-sucrose”), or introduction of chlorine atoms in the 6 and 6‘-positions decreases the sweetness.

Often, the derivatives actually taste bitter, as in the case of octaacetylsucrose, made by simple treatment of sucrose with acetic anhydride. This material is three times as bitter as strychnine, classing it among the bitterest substances known.

It was thus a great surprise when Leslie Hough’s research group at the University of London, UK, reported in 1976 in the British scientific magazine Nature [76] that the newly synthesized “tetrachloro-galactosucrose” (20; 4,6,1‘,6‘-tetrachloro-4,6,1‘,6‘-tetradesoxygalactosucrose) was about 200 times as sweet as sucrose (see Fig. 25)!

After the astonishing discovery of 20, it was found that other chlorine-containing sucrose derivatives were sweet as well. From the standpoint of commercial development of a sweetener, not only sweetness plays an important role, but so do taste profile, the synthetic effort involved in preparation, and toxicologic considerations. Taking these into account, 4,1‘,6‘-trichloro-4,1‘,6‘-tridesoxygalactosucrose (21) turned out to be the most promising derivative, which became known as “sucralose” (Splenda®). It proved necessary later, however, to correct the sweetness value of 2000 reported in the original patent [77] to 600.

How the sweetness value for tetrachloro compound 20 was originally established is not reported in the Nature article. That is a shame, since the reader is thereby deprived of what is the most curious discovery story related to any sweetener [78]. In the book cited – which is by the way well worth reading – the strange story of Splenda’s discovery is accurately reconstructed on the basis of interviews conducted with those involved. Warning: The Internet offers a number of abbreviated and/or simply false versions of the events of the time.

A close cooperation existed between the research group of Leslie Hough and the sugar producer Tate & Lyle Sweeteners. A former doctoral candidate of Hough, Dr. Riaz Khan, worked at Tate & Lyle, and was studying the enzymatic degradation of chlorine-substituted sucroses. One day, Khan inquired of Hough if the latter could provide him with a pure sample of tetrachloro compound 20 for use in his biochemical studies. Hough referred him directly to his doctoral candidate Shashikant Phadnis.

Dr. Riaz Khan has described the initial conversation between the two Indian chemists [78]: “I called him (Phadnis) up, and he inquired what I needed the substance for. Without going into too much detail, I gave him the simple answer that we wanted to ‘test’ it for some reason. The fact that we both came from India was a real piece of luck, because he misunderstood ‘test’ as ‘taste’. It was for that reason alone that the discovery became possible.”

Shashikant Phadnis described what happened next as follows [78]: “I thought I ought to taste it […] so I took a little bit of it on a spatula and tasted it with the tip of my tongue. What a surprise! It was intensely and pleasantly sweet. So then I proceeded to taste all the sucrose derivatives I had on my lab bench, one after another. I found out that many of them tasted sweet, although the intensity of the sweetness varied considerably. […] When I told Les (Leslie Hough) about my discovery, he was quite amazed, but also a little bit troubled. ‘Are you crazy?’ he asked me, ‘How can you taste compounds, without knowing anything about their toxicity? That can be really dangerous’.

But I assured him that I had literally only tasted the compounds, and not swallowed them … Finally, I christened the tetrachlorosucrose for Les with the name ‘serendipitose’. Later on, he put a couple of crumbs of the compound in a cup of coffee without consequences. When I reminded him that it could be toxic, he replied only with: ‘Oh, forget it. We’ll survive!’, and guzzled down the whole cup.”

Khan had already demonstrated that substitution of the OH-group in the 6′ position of sucrose with chlorine hinders enzymatic cleavage of the sucrose skeleton. That could mean that a sucrose derivative so modified would not be dismantled in the body, and therefore couldn’t contribute to energy production. In other words: a chlorine substituent in the 6′ position might make the compound “calorie-free”.

After the surprising discovery of this new class of compounds, the various other hydroxyl groups of sucrose were systematically exchanged for chlorine. In the first patent of 1976, the nine chlorine-containing variants in Figure 25 were cited, and many more were to follow [79]. The associated synthetic work was immense, and difficult, since only with constant inclusion and removal of protective groups was it possible to achieve the selective guidance required in the syntheses.

Between the time of patenting and first authorizations (1991 in Canada, 1993 in Australia, 1999 in the United States, 2004 in the EU), 15 years were to pass, during which health risks due to sucralose were examined in innumerable and comprehensive studies. These showed that sucralose was not metabolized in the body. After a single dose of 14C-labeled sucralose, a subject would excrete within five days 85.5 % of the ingested material through the feces and an additional 11 % via the urine [80]. Barely 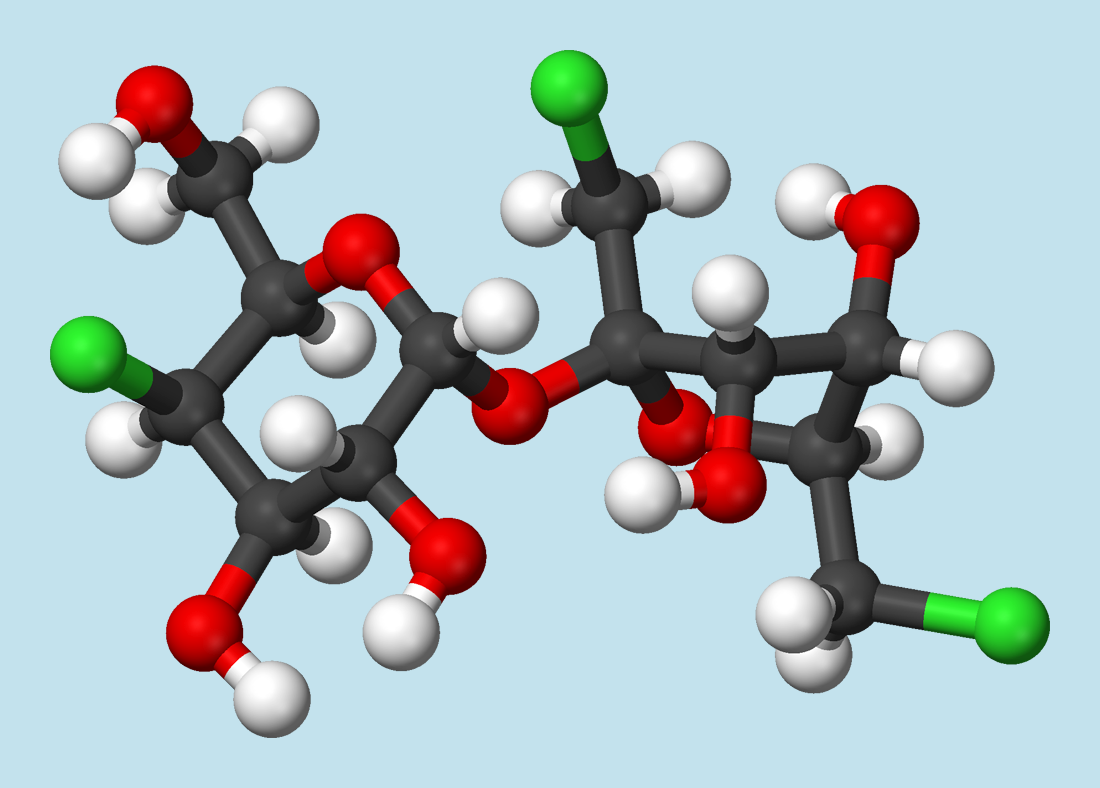 3 % of the incorporated radioactivity was eliminated through the urine as glucouronide; that is to say, a small fraction of the sucralose bound glycsosidically to glucuronic acid in order to further increase elimination via the kidneys [81].

A certain amount of consumer hesitancy with respect to sucralose has been due to concern about chlorine-containing organic compounds. There is a fundamental difference, however, between chlorinated biphenylene or tetrachlorodioxin, for example, and sucralose: sucralose is quickly eliminated without being metabolized, and thus does not accumulate in fatty tissue. This is a consequence of its pronounced hydrophilic character, expressed by high water solubility: 283 g/L at 20 °C.

The example of sucralose will be used here to work through the important relationship between ADI-value (Acceptable Daily Intake) and risk to a consumer. The ADI-value, in this case 15 mg/kg bw/d (body weight per day), is simply a recommended benchmark, based entirely on studies of chronic toxicity. It is a value that can occasionally be exceeded quite harmlessly by the consumer, and represents merely a recommendation, one that should not be constantly overstepped.

Since sucralose may be present in low-calorie soft drinks, sweet dishes, sauces, etc., actual intake will depend on the amount consumed according to a person’s individual dietary habits, which are in turn influenced by cultural environment. The daily eating behavior in 2,000 American households was recorded over the course of two weeks, from which average daily sugar intakes were ascertained. Assuming that total sugar intakes were replaced entirely by sucralose, one would arrive from this study at a sucralose consumption of 1.1 mg/kg bw/d [82], a value far below the recommended ADI-value of 15 mg/kg bw/d. In other words, a person with the greatest sweet tooth of all could, without any hesitation, replace sugar entirely with sucralose.