In this part, we have a look at the optimal mixture of sweeteners to replicate the taste of real sugar, after covering saccharin, the poisonous lead(II) acetate, cyclamate, aspartame, acesulfame-K, thaumatin, sucralose, dihydrochalcones, neotame, and stevia.

22. The Wonderworld of Sweeteners

All ten of the sweeteners presented in this article were tested for their effects on the heart and kidneys, with the conclusion that when consumed in sensible amounts they are completely harmless. It, therefore, appears not to matter at all which sweetener one utilizes. The main thing is that it be sweet!

But in truth, it really isn’t all that simple, since one sweetener is not exactly like the next one. Characteristics apart from plain sweetness that contribute to the quality of a sweetener have been brilliantly laid out by Grant E. DuBois of the Coca-Cola Company [100]: 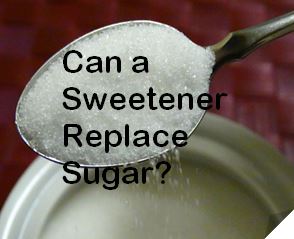 Above all, a sweetener must taste good; in fact, it should as nearly as possible taste like pure sugar!

Can a sweetener replace sugar? In an experiment it is shown that using the example of 8 % sugar water, that from a taste standpoint no sweetener can completely replace sugar. Only sugar can evolve a sweetness sensation that is free of every overtone or aftertaste, providing a full and lasting sweetness. Equally sweet solutions of every substitute sweetener will deviate to some extent from this ideal. The taste of pure sugar water is best approximated with aspartame or a 1:10 saccharin/cyclamate mixture. (For details of the experiment click on the picture on the right.)

In cola drinks, with their own strong, unique taste, the situation is different, because here sucrose itself fails to develop the full sweetness. In this case, cyclamate comes closest to matching cola sweetened with sugar, although aspartame produces cola that tastes almost like sugar water. In vanilla pudding, a saccharin/cyclamate mixture is the sugar substitute that performs best from a taste standpoint. These examples illustrate that the taste quality of a sweetener also tends to be a function of the food matrix.

Moreover, sweetening-agent mixtures display qualitative and quantitative synergies. Figure 33 shows the quantitative synergistic effect in the case of an aspartame/acesulfame-K mixture, where, at the optimal 1:1 ratio, one observes a remarkable increase in sweetening power of ca. 50 % over the individual components. This, in turn, allows a reduction in the total amount of sweetener.

Even more important for a mixture than a quantitative synergistic effect is a qualitative effect. The overall taste impression afforded by a sweetener can simultaneously mean that, at higher concentrations, any accompanying off-taste overtones will often be “masked”. For example, after extensive sensory testing it was determined that, in aqueous solutions, the acesulfame-K/aspartame mixture, and even better, the acesulfame/aspartame/saccharin/cyclamate mixture (2:2:1:10) constitutes a nearly perfect substitute for sucrose [101].

Industrial food producers devote enormous effort to seeking an optimal mixture of sweeteners for each of their products, with minimal off- or after-taste. This is especially true for low-calorie beverages, as illustrated in Table 3 for the example of the Coca-Cola Company. Added sweeteners and their amounts for each nation correspond to the relevant legal situations and applicable taste preferences [102]. Because of the prohibition of cyclamate in the United States, this sweetener is absent from the American version of Diet Coke, which is sweetened exclusively with aspartame, whereas the equivalent product in Germany contains the three-fold combination aspartame, acesulfame-K, and cyclamate.

22.2. Some Sweeteners Can Do More than Simply Taste Sweet

With respect to the taste aspect of sweeteners, it is customary to regard mainly negative characteristics, such as a bitter aftertaste. In the case of thaumatin, a licorice-like aftertaste is often brought up, but its positive properties with respect to taste are seldom mentioned. Experienced testers reported around 1975 that, when they were “rewarded” with a peppermint candy at the end of a tasting session involving thaumatin, the latter tasted especially “minty” and much more aromatic [103].

This phenomenon led to the discovery that thaumatin dramatically reduces the taste-threshold values for certain ethereal oils (see Tab. 4). After addition of 0.5 mg/kg of thaumatin to many aromatic oils or extracts, the detection levels for these additives were reduced by the factors reported in the table [103]. Especially high sensitivity increases were registered with typical chewing gum additives. In this application, the minor licorice aftertaste of thaumatin itself seems to bring no negative consequences.

In view of this taste-intensifying effect, thaumatin is today used above all in chewing gums to ensure that the effect of aromatic additives will be retained for as long as possible during the chewing stage.

22.3. The Quest for a Better Sweetener

Even a fleeting glance at the currently allowed sweeteners (see Fig. 34) reveals that there is no obvious relationship between chemical structure and sweetness. From lead acetate to chlorinated diterpenes, from chlorinated disaccharides to amidosulfonic acids, from dihydrochalcones to oxathiazinones, from dipeptides to proteins – one seems to find scattered representatives of sweet species everywhere.

Because of this unpredictability, literally all the known artificial sweeteners were discovered by accident, in that traces of a substance from a chemical laboratory somehow found their way into the mouth of some alert chemist. Should we, therefore, follow the (we hope facetiously offered) advice of Robert H. Mazur of the American NutraSweet Company [104]: “Taste every substance that you synthesize!”? Hardly, since all eating, drinking, or smoking in a chemical lab has long been strictly forbidden, and for good reason. It may be that a few potential sweeteners will, therefore, go undiscovered, but at the same time, many bright chemists will retain their good health.

Whether new sweeteners will be discovered in the future is uncertain, and whether one or more of them might someday be brought to the point of market-readiness is even more uncertain. Even now, a good dozen compounds show significant potential. Among these are a few plant components, but also some very promising synthetic materials, like sucrononic acid (see Fig. 35). Sucrononic acid (35) was discovered in 1990 by the French Jean-Marie Tinti and Claude Nofre [105], and has a sweetening power of 200,000; today it still holds the world record for sweetness. But whether this compound will ever be market-ready remains questionable.

Every official approval of a sweetener, whether synthetic or natural, demands massive, dedicated funding, since the studies required for food-additive approval are today much more extensive and stricter even than those for medically active ingredients. One can thus proceed from the assumption that new sweeteners will never simply fall into a researcher’s lap, and then suddenly appear in large quantity in the marketplace.

We must simply wait patiently for the next successful sweetener: i.e., sit tight and meanwhile enjoy a cup of tea. And if you want to sweeten that tea, then enjoy one or more of the wide variety of sweeteners already available. There’s already something suitable for everyone. One must simply turn the packages over, and perhaps employ a magnifying glass in the course of detecting the desired ingredients and then making a purchase.

Classic examples include cyclamate/saccharin (e.g., Assugrin Classic® or Zückli®), perhaps refined with a bit of thaumatin (e.g., Feine Süße, Natreen®), or, if it needs to be a bit “retro”, then pure aspartame from the 80s (e.g., Assugrin Gold®), or perhaps a “hip”, freshly authorized, steviol/sucralose mixture (e.g., Natreen Stevia®). For uncompromising “bio-freaks”, maybe pure steviol glycosides prepared with aromatic substances (Assugrin SteviaSweet®). Of course, one can also enjoy tea the old-fashioned way: with sugar, or even unsweetened. Long live the freedom of choice: Each to his own taste!

After studying pharmacy in Mainz, Germany, Erich Lück (born in 1929) obtained his doctorate in Frankfurt am Main, Germany, in food chemistry. In 1957, he founded there, at the Farbwerke Hoechst, the research and development division Food Science Technology. His areas of specialization were the food preservative sorbic acid and the sweetener acesulfame-K. In addition, he was Director of numerous relevant national and international expert committees for many years. His literary work comprises, in addition to monographs related to conservation materials, some of them translated into foreign languages, a Handbook of Food Additives, and the world’s most comprehensive English/German technical food science dictionary, which has passed through four editions.

Professor Klaus Roth of the Free University of Berlin, Germany, is the permanent author of the Focus Section of the ChemViews Magazine.