After covering saccharin, the poisonous lead(II) acetate, cyclamate, aspartame, acesulfame-K, thaumatin, and sucralose, we have a look at the combination of aspartame and acesulfame in one salt, as well as at sweet dihydrochalcones.

A salt consisting of not only a cationic but also an anionic sweetener has the advantage that no foreign counterion is present, as is preferred with respect to low-sodium diets. Aspartame (5), which exists in its protonated form in acidic media, suggests itself as a potential cation in this case, with acesulfame as its anionic partner (6).

Compared to a simple mixture of (5) and (6), the salt shows an increased sweetening power (about 11 % higher) due to the absence of a metallic cation. Moreover, additional synergistic effects associated with the two components further increase the sweetening power, ultimately to a value of around S = 350. 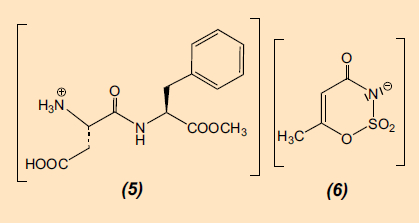 Since the aspartame/acesulfame salt dissociates completely in water, it tastes exactly like a mixture of the two sweeteners. However, the aspartame/acesulfame salt offers certain advantages relative to a mixture of the two sweeteners [83]: The salt is not hygroscopic, is very stable in crystalline form, and dissolves more rapidly in water than the simple mixture. These characteristics are useful in such applications as table-sweeteners, powder-form instant-mixtures (e.g., for instant drinks, instant desserts), and pharmaceutical preparations.

The aspartame/acesulfame salt increases the shelf-life of chewing gums relative to the common alternative aspartame alone, since the reactivity of amino groups in the salt is lower with respect to aldehydic flavoring components (e.g., cinnamon or cherry flavor). Despite these advantages, use of the salt is rare apart from its application in chewing gum.

In the context of a 1960s research project at the U.S. Department of Agriculture, the structural characterization of bitter components in the peel of citrus fruits was undertaken to obtain clues as to the relationship between the familiar bitterness and structure. From a chemical standpoint, the components in question were flavonoids, in which a substituted flavone is joined in glycosidic fashion to a saccharidic unit (Fig. 26).

The peels of citrus fruits contain relatively large amounts of specific flavonoids [89], ones in which a hydroxylated flavone system (Fig. 26; blue) is joined glycosidically to a disaccharide (red), consisting specifically of glucose and rhamnose.
The most common flavonoids in citrus fruits are the bitter compound naringin (22) and neohesperidine (23), found in grapefruit (Citrus paradisi) and bitter oranges (Citrus aurantium), as well as the flavorless hesperidine (24), present in oranges (Citrus sinensis) and lemons (Citrus limon).

The two corresponding dihydrochalcones (DCs) 8 and 25 quite unexpectedly turn out to be extremely powerful sweeteners, where neohesperidine-DC (8) possesses the significantly higher sweetening power of the two [85]. In a preparative sense, they can very easily be obtained from the other flavonoids. On the other hand, the entire worldwide crop of bitter oranges would not suffice to commercially produce the required amount of neohesperidine (23). In contrast, naringin (22) is available in virtually unlimited quantities, since grapefruit peels contain it to the extent of nearly 8 % [86, 87].

In a chemically brilliant synthetic sequence (see Fig. 27), the natural product naringin (27) is first cautiously disassembled and combined with isovanillin to give the natural product neohesperidine (23) [88]. 23 is reduced with hydrogen in the presence of a Pd/C catalyst and 10 % KOH in a “one-pot” reaction at room temperature in virtually quantitative yield to the dihydrochalcone (8) [84].

Industrial preparation also starts from naringin (22) (see Fig. 27), which is first rearranged to naringin chalcone (28). Under rather drastic reaction conditions (30 % KOH, 100 °C), this rearrangement is followed by a retro-aldol condensation, producing phloracetophenone (29). After isolation of the latter, in place of the already eliminated p-hydroxybenzaldehyde, the aldehyde isovanillin is introduced through condensation. Finally, the resulting chalcone 27 is hydrated to give sweetener 8.

Neohesperidine-DC (8) is distinguished by its high stability in the acidic pH range, which is of interest with respect to soft drinks and fruit juices. Moreover, under typical conditions for industrial thermal sterilization, neohesperidine-DC survives intact in fruit juices. Only after treatment for an hour at pH 2 and 90 °C does it show 8 % decomposition.

Toxicological studies on rats, carried out in 1987 by the former Scientific Panel on Foods of the European Commission, led to an ADI (Acceptable Daily Intake) value of 5 mg/kg bw/d for neohesperidine-DC. Additional tests conducted in the meantime with female rats regarding possible teratogenic effects showed no pathologic changes up to 3.3 g/kg bw/d. For an adult human, this represents a no-effect dose with a daily intake of over 200 g of sweetener, equivalent to the sweetening power of more than 100 kg (!!) of sucrose.

Due to its unsatisfactory aftertaste at higher concentrations, use of neohesperidine-DC is limited. In small amounts, it functions as a flavor enhancer, and is called upon primarily to serve in this role.